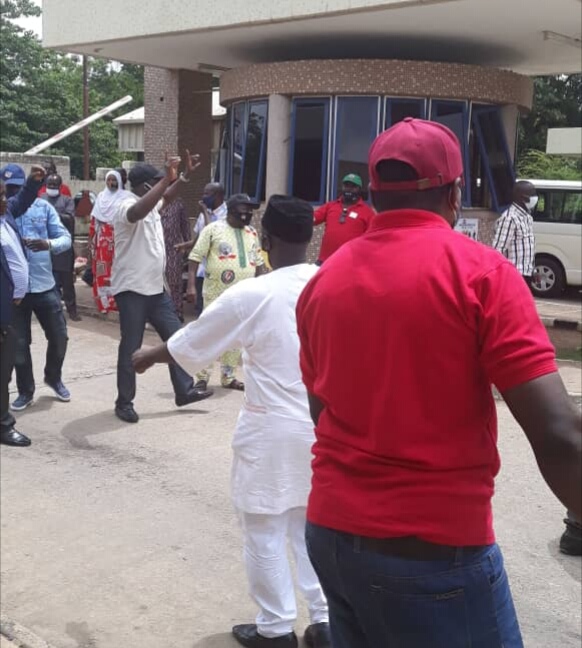 *Some of the protesters at the TCN headquarters

Lagos — Protesters on Wednesday stormed Power House, Corporate Headquarters of the ministry of Power and the Transmission Company of Nigeria, TCN over removal of the former TCN Managing Director, Usman Gur Mohammed.

Mr Mohammed was sacked by the minister of power, Engr. Sale Mamman on Tuesday night.

Protesters under the aegis of the Senior Staff Association of Electricity and Allied Companies, SSAEAC and the Nigerian Union of Electricity Employees, NUEE at TCN branch, barricaded the entrance to the building, causing partial office activities as they accused the minister of high handedness and undue process in sacking Mr. Mohammed.

Some top officials who arrived early prior to the protest were locked inside the complex while others were not allowed entry, as the aggrieved workers demanded a reversal of the sack by the Minister.

The Minister of Power, Engr. Sale Mamman, had Tuesday night through a statement, sacked Mohammed and replaced him by appointing Engr. Sule Ahmed Abdulaziz as the Acting Managing Director.

“Accordingly, the Managing Director of the TCN, Usman Gur Mohammed has been removed from office with immediate effect. He is being replaced with Engr. Sule Ahmed Abdulaziz, as Managing Director, in acting capacity.

The Minister has also confirmed the appointment of four directors who have been on acting position in the Company for some time.

According to the minister, all the changes and appointments were approved by President Buhari.