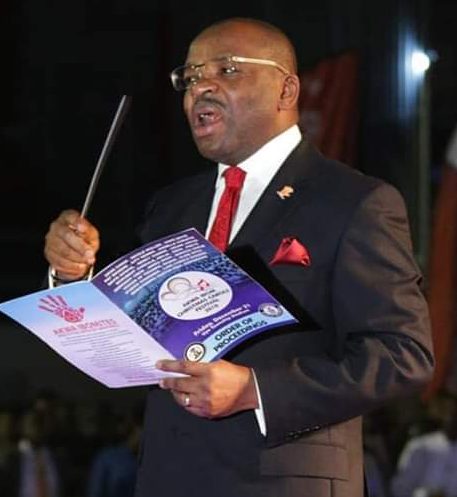 25 December 2018, Sweetcrude, Port Harcourt — Akwa Ibom State Governor, Udom Emmanuel, has said that the provision of steady electricity to the people is not rocket science, and can be achieved through strategic planning.

To this end, the Governor has announced plans to launch an electricity-for-all-initiative in the new year, which would ensure power supply reaches every nook and cranny of the state.

Speaking at the 2018 Christmas Carol night in Uyo, Governor Udom said for three and half years since his administration came on board, the State has remained the most peaceful in the country, attracting foreign investors and becoming a tourist destination of choice.

He also stated that work was going on steadily on the Ibom Deep Seaport, in addition to numerous road projects across the state.

According to him, “Three and half years ago, when we came in, Uyo and most of the rural communities were covered in darkness and we felt that was an unacceptable situation.

“Through our investments by way of upgrading of the sub-stations, today, electricity has improved significantly across the State and by the New Year, we hope to launch our “electricity for all initiative”.

“I have always maintained that the provision of steady electricity is not rocket science, all it takes is strategic planning, and this, we have done and we intend to do more in the years to come.”

The governor further disclosed that the central plank of his administration is industrialization and he was determined to make the State an industrial hub within the region.

He further announced that his administration is planning to launch a state-owned airline, Ibom Air, to lessen the problems currently being encountered by numerous air travellers to the state.

“Three and half years ago, when we came in, we promised our people that the central plank of our governance will be on industrialization as a means of creating wealth and jobs. Today, we have delivered above and beyond our expectations, and we give God the glory for this!

“In spite of the gloomy and turbulent economic climate that has made most State Governments unable to pay salaries, unable to undertake capital projects, we have brought into this State several industries, and they are all there for everyone to see- from the Syringes Manufacturing Company to the Metering Solutions Company, the pencil and tooth-pick manufacturing company, the Fertilizer Blending Plant, the Flour Mill, Coconut Refinery currently on-going, the rice and cassava mills, the AKEES mini Industrial parks etc.

“Our state-owned Obong Victor Attah International Airport has a Category 2 runaway and work is on-going on the second taxiway. To ensure that our State remains the destination of choice for foreign investors, we are launching Ibom Air, our wholly owned Airline that will lessen the problems currently being encountered by our numerous airline travelers.

“Work is going on steadily on Ibom Deep Seaport project and our dream to open up our State through land, air and sea will come full cycle.

“When we promised all these, our naysayers said it couldn’t be done, and some are still deluding themselves that it hasn’t been done, even when they are riding on the road we have built, are enjoying the steady electricity we have provided, are being treated in the world-class hospitals we have remodeled and equipped with modern amenities, and whose children are receiving quality education in our public schools.

“We give God the glory for this great feat. We will never go back to those dark days again.”
Attachments area