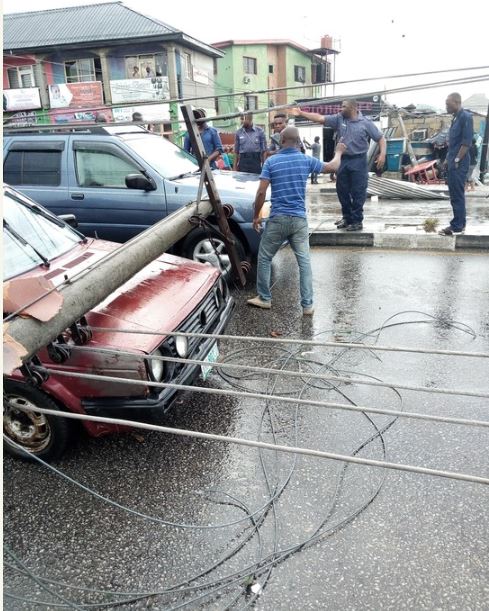 *Electricity distribution pole damaged by the rainstorm in Port Harcourt.

23 May 2018, Sweetcrude, Port Harcourt — Two weeks after rainstorm forced a greater part of Port Harcourt into darkness by destroying 311 high tension electric poles and feeders, power has been restored to 90 percent of the affected areas.

The areas that were thrown into darkness as a result of the rainstorm include Rumuola, BoriCamp, Rukpokwu, Rumuomoi, Federal, Wokoma, Agip Estate, Rumueme and GRA phase II.

But a survey around these areas shows that power has been restored to most of the places, except Wokoma (Mile Three, Mile Four) and parts of Agip Estate, that are still battling the forced power outage.

Meanwhile, the management of the Port Harcourt Electricity Distribution Company, PHEDC, has disclosed that 90percent of its electrical facilities damaged by the rainstorm have been restored by the company.

The Head, Corporate Communication of PHED, Mr. John Onyi, explained that out of the seven feeders that were destroyed by the rainstorm, five have been successfully restored.

Onyi said millions of Naira have so far been spent in replacing the damaged poles and other electrical facilities.

He appealed to customers whose power has not be restored to be patient, saying that contrary to its interim release, a total of 311 of its high tension poles were destroyed by the rainstorm.

“The damage was enormous. We are doing it in phases, as we speak, Rainbow/Elekahia feeder, Rumuola 11KV feeder, Rumuola feeder III, Shell feeder and Rumuomoi feeder have been restored.

“We are making efforts to restore all the feeders but so far we have restored five out of the seven feeders, serious action is going on in Wokoma feeder and of course parts of Agip.

“311 high tension poles at the end of the day, were damaged by the rainstorm,” Onyi said.