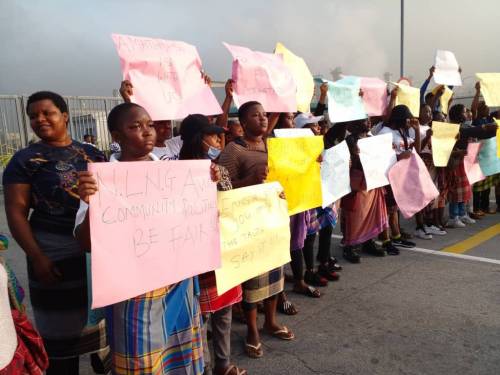 *Some of the protesters at the NLNG entrance

Port Harcourt — Reactions are now trailing the protest by Finima community against the Nigerian Liquefied Natural Gas Limited in Bonny, Rivers State and the counter protest, which led to destruction of properties and bodily injuries on the protesters.

The lawmaker representing Bonny/Degema Federal Constituency in the House of Representatives, Hon. Farah Dagogo, said the protest and the unfortunate violence would not have happened, if oil and gas multinationals operating in the Niger Delta, were doing things the right way.

Dagogo who described the violence as unfortunate, said it was a sad reflection of the sour relationship that now exist between companies and their host communities, as brothers were being pitched against brothers.

He urged the aggrieved people of Finima Community and all others in Bonny LGA to sheath their swords, adding that other means of getting a workable solution that would be beneficial to all, are being explored.

“The violence that was witnessed in Bonny Local Government Area of Rivers State between Finima community youths and other alleged youths of the LGA was unfortunate, and a sad reflection of the sour and acrimonious relationship that now exist between companies and their host communities.

“The peaceful protest against the NLNG, over the propriety or otherwise of a General Memorandum of Understanding, which was intercepted and later turned violent that has now left many injured and properties razed, would not have been necessary in the first place if things were done the right way.

“While apportioning blames now may not get the desired outcome , it is nevertheless instructive to note that the people of Finima Community and the various impacted communities in the Niger Delta and beyond, where the NLNG gas pipeline passed through, are within their rights to legitimately demand for what is theirs.”

Meanwhile, the management of the Nigerian Liquefied Natural Gas Limited, has confirmed that there was a protest and counter protest, which led to blockade of the major routes to its facility in Bonny Island on Thursday.

NLNG General Manager, External Relations and Sustainable Development, Eyono Fatayi-Williams, in a statement said as a good corporate citizen, the company applies the principle of fairness and inclusiveness in engaging with its esteemed stakeholders.

“The Company has always considered all stakeholders in the community trusted partners, and it continues to maintain this position.

“NLNG remains fully committed to sustainable development in the kingdom, hinged on active community participation to drive initiatives and projects that positively impact the lives of the community.”