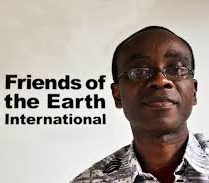 Port Harcourt — Tuesday 10th November 2020 marked the 25th memorial of the execution of renowned environmentalist and play wright, Ken Saro-Wiwa and eight others by the federal military government of Nigeria.

Speaking at the event, Environmental Rights Activist, Dr. Nnimmo Bassey, eulogized the legacies and selflessness of the late Ken.

Bassey who sang a poem, titled ‘we thought it was oil, but it was blood’ charged the people of Ogoni to imbibe intellectual militancy instead of violence, just like Ken.

“My advice to young people, when you have the opportunity to make a demand; make the biggest demand possible. Ken was a man of ideas, a man who believed in intellectual militancy, a trait which I want the Ogoni people to imbibe.

“Ideas can never be killed that is why today, when he said, I may be killed but my ideas will not die. We thought it was oil, but it was blood.”

Also speaking, one of the defense counsel to late Ken Saro-Wiwa and former House of Reps member, Uche Onyeagucha, urged the people of Ogoni to be resilient in their struggle.

“Ogoni people taught Nigerians how to fight, ho to unite and the courage to fight. Ken was never intimidated or afraid of dying, but the question is, how many of us are ready to die today for the struggle?

“Nigeria is worst today than when Ken won the battle in 1990s, so you have to double your efforts because alot still need to be done and we need more Ogonis and Nigerians with the courage like Ken. I believe that for each and everyone of us, there is a Ken Saro-Wiwa in us.”

For her part, a lawyer and activist, Stephanie Fiiwe, sued for peace in Ogoniland, while demanding the exoneration of Ken Saro-Wiwa and the Ogoni nine, by the Federal Government.

“Our leaders were killed without given a chance and their stories just not be cut short. We must continue the battle and we won’t stop. The Ogoni nine must be exonerated, their fight must not go in vain.”