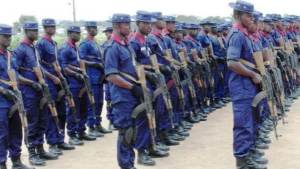 31 March 2018, Sweetcrude, Port Harcourt – The Nigerian Security and Civil Defence Corps, NSCDC, has charged members of the public to synergise with the organisation in the fight against oil theft, illegal bunkering and sale of adulterated petroleum products in the country.
NSCDC, which is the only paramilitary agency with the responsibility of securing national assets, also called on Nigerians to report any petrol station which patronises illegally refined and adulterated products from artisanal refineries in the creeks.
The Public Relations Officer of NSCDC, Rivers State Command, Mr. Akin Oguntuase, speaking to our correspondent in Port Harcourt, said the command will not hesitate to seal off such petrol station, as adulterated petroleum products were inimical to societal good.
Oguntuase explained that the command had in the past sealed off several filling stations in the state with adulterated products from illegal refineries.
He stated that once they have been informed about such petrol station, they would swing into action to ascertain if the products at the station was really adulterated, and if found wanting such station would be sealed off and the operators charged to court.
According to him, “If you buy products at any filling station and find out that the product is not as it is supposed to be, please feel free to report to us and we will swing into action. Don’t just keep quiet, because we cannot do it alone. We cannot be everywhere at the same time, if you report to us your identity will be covered.
“We have our apparatus to check if actually the product they have is genuine. Once we discovered that a filling station is selling adulterated products, I assure you that we will seal it off, we have done it before.
“We cannot deny the fact that some filling stations are involved with adulterated products, and we are watching out for such filling stations to sanction them and arrest their operators.
“We cannot do it alone, that’s why we need cooperation from the general public. If you buy diesel and it knocks off your engine, report to us the filling station, these are the kind of information we are looking for.”
The NSCDC official also said by way of identifying adulterated products, especially Automated Gasoline Oil, the colour of a genuine product is usually pure and clear, while an adulterated product is darker or greenish in colour.
He explained that every month, operatives of the Corp raid the creeks and destroy illegal refineries, assuring that the number of illegal refineries in the creek have drastically reduced, while expressing optimism that the menace would soon become a forgotten issue.
Asked how these adulterated products still gets into the public domain despite efforts of the corp, Oguntuase said it was like having illegal immigrants in Nigeria despite security agencies at the border, “You see the issue of security is everybody’s business, we are trying our best. There is no way we can keep these guys off without the cooperation of the general public,” he said.