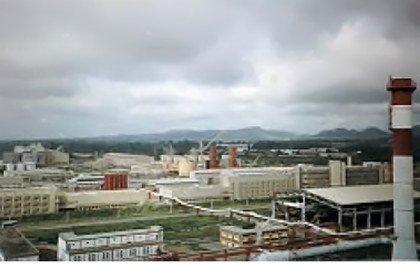 29 May 2018, Sweetcrude, Lagos — The House of Representatives will hold a public hearing on its investigation into the failure of Nigeria’s foremost steel complex, Ajaokuta on June 4.

In a letter seen by SweetcrudeReports, addressed to the Minister of Solid Minerals Resources, Sole administrator of both Ajaokuta Steel Company Limited, ASCL and Itakpe Iron Ore, NIOMCO, and others, the ministry is to appear before the Reps from 9 am to 5 am on the said date.

Holding at the House of Representatives new auditorium, Abuja, the investigating committee will be chaired by Rt. Hon. Femi Gbajabiamila.

The ad-hoc committee began its investigation on April 12 after the March 1st exposé made at the House of Representatives sectorial debate on ASCL.

Ajaokuta Steel in Kogi state, Nigeria, is the second largest in Africa and 12th largest iron ore steel plant in the world.

However, the company has been under lock and key since 1994 after the Russians abandoned its construction.

The federal government said it has spent over $8bn on the nearly unproductive steel plant since its inception, the bulk which of has been largely spent on the payment of workers salaries.

Meanwhile, the Federal Government is still planning to spend $400m more on its revival.

In a petition read before the House of Representatives in March this year, a lawyer, Natasha Akpoti had revealed plots by some individuals in the Goodluck Jonathan’s administration and the incumbent Muhammadu Buhari’s administration to fraudulently acquire the steel company for themselves.

In her speech, Natasha revealed how a Russian company had to abandon the project in 1994 because Nigeria fell short of its contractual agreement by not releasing funds needed for the completion of the steel company.

Natasha also claimed that Russian former president, Vladimir Putin wrote the Nigerian government on how to modernise and complete the Ajaokuta complex, but key Nigerian actors have been silent on the offer because of their personal interest in the steel company.

Natasha also explained how late president Umar Yar’Adua terminated the concession of Ajaokuta and Itakpe steel company to GINL after a committee was established to investigate the concessioning process and the state of Ajaokuta in 2008.

She also claimed there are several indications that the current Minister of Solid Minerals and Steel Development, Kayode Fayemi and Governor of Kogi State, Yahaya Bello have interest in the steel company.

Natasha disclosed that Fayemi is currently making plans to ensure GINL, again gets control of the steel companies.

The Culprits
Natasha in her over 30 minutes presentation on the floor of the House of Representatives repeatedly indicted Fayemi for his role in re-concessioning the Ajaokuta Steel Company to the same GINL which a committee set up by the late Yar’adua had already indicted as not fit for the Steel Company because the terms of concession favours GIHL at the expense of the country.

She said, “I would like to state that the same re-concessioning which Mohammed Adoke tried to have effected before the termination of the Goodluck Jonathan’s administration and the re-concession agreement Fayemi entered in August 1st are the same, word for word including the typographical error made in it.”

Another person she indicted as being responsible for the present state of Ajaokuta is Mohammed Adoke, who was a former Attorney General of the Federation.

Natasha also claimed Adoke successfully assisted the company against the country at an Arbitration Court in London where GINL instituted a case against Nigeria for pulling out against the concession agreement with it.

Natasha revealed that the millions of dollars Fayemi claimed Nigeria was ordered to pay GINL was conjured by him and not the court.

She also claimed Yahaya Bello, Governor of Kogi state, also played a role in the swindling of the Nigerian government by ordering Nigeria’s Corporate Affairs Commission to register GINL even when it is clear the company does not have required documentation.

“We wrote a petition to the registrar general of CAC who was shocked and does not know about the company’s registration and ordered the setting up of a committee to investigate.

“I received a letter a few months after an investigation from the Acting Registrar General of CAC who told me that they have allowed the company to proceed. CAC does not have the right to regularise an illegality. I was told there were orders from above to register the company. I was told Kogi state governor sent a commissioner, Idris Asiwaju and there were pressures from the presidency,” She narrated.

She added that Ajaokuta Cooking Nigeria Limited applied for a registration which was authorised by the Governor of Kogi state, Yahaya Bello in partnership with GINL. Ajaokuta cookings has two directors which are Onochie Ikechukwu who is from Benue state and Ancheba Emmanuel which investigations revealed are both affiliates staffs of GINL.

It will be recalled that the minister were all summoned by members of the House of Representatives, but they failed to appear, stating that they have other official duties to attend to.

The prospects
If completed, has been estimated that Ajaokuta is capable of generating up to 75,000 direct jobs and one million indirect jobs and this would to a great extent reduce the rate of unemployment in the country.

At least, 10,000 jobs are expected to be employed in the complex.

The steel company is also expected to 5.2 million tonnes of steel, a quantity which is able to push the country into the league of big steel production companies.

Revival plots
It has been estimated that the country needs a total of $1.21bn to put Ajaokuta steel complex into production.

On her part, Natasha recommended that re-concession of Ajaokuta should be immediately halted and prosecution of GINL for economic crimes, including the arrest and prosecution of all government officials and promoters of GINL indicted of asset stripping.

Afterwards, the House of Representatives and some stakeholders in the sector called on the government to terminate its deal with GINL and fully take over the ownership of the company as it can be used to revive the nation’s economy.

Federal Government insist on privatisation
But the Federal Government has repeatedly faulted the request that it should handover the Ajaokuta Steel Company to a Russian company that began the building of the plant for completion.

Indeed, just as Natasha has been accusing government officials of plotting to acquire the steel plant through the back door, there have also been allegations that her campaign to stop the privatisation of the plant is being funded by an Indian group in Nigeria interested in taking over Ajaokuta without going through the necessary process.

The government had argued that the termination of the concession granted by the Obasanjo administration on Ajaokuta by the late president Umaru Musa YarÁdua’s government in 2008 resulted to a dispute at the international court of arbitration in London which lasted for many years during which Nigeria was barred from putting Ajaokuta into use.

The Ministry of Mines said this was the situation until the current government negotiated and resolved the case thereby taking Ajaokuta back.

It added that with the new agreement, the former operators of Ajaokuta are to take over and operate NIOMCO for seven years while Ajaokuta is now free for Nigeria to operate.

The Ministry of Mines and Steel Development had also insisted that contrary to claims by Natasha, there is no Russian company interested in rebuilding Ajaokuta.

It pointed out for instance, that the defunct Tyanjpromexport, TPE, the company that initially built the Ajaokuta Steel Company was a consortium of several construction companies from different countries that made up the old Union of Soviet Socialist Republic, USSR, and is no longer in existence.

It has also been pointed out that the companies are scattered in the 19 countries that made up the old Soviet Union and there is no way Putin can call those companies to come together and rebuild Ajaokuta.

Having successfully retrieved Ajaokuta, the federal government said its goal now is to hand over the company to a competent investor with proven records and clear evidence of both the expertise and financial capacity to put the Company into effective operation.

While accusing Natasha of ‘miseducating’ lawmakers over the issue, the Minister of Mines had also insisted that government would not again put its money into the revival of Ajaokuta project.

He said a machinery is already in place to conduct an open, transparent and credible bidding in line with the extant laws and rules governing privatisation in the country and any company, including the one favoured by Natasha can participate

In its response to calls to terminate the agreement, the federal government said Nigeria has incurred sufficient debts (through rampant terminations) to have built multiple steel plants.

It added that to repeat the spate of terminations a fourth time and abrogate the ‘very settlement agreement designed to halt the haemorrhaging of our national treasury would be a tragedy of epic proportions.’

It also asked the House of Representatives to support the Federal Executive through its legislative output in discharging its mandate to govern and not use their oversight function to impermissibly intrude upon executive matters to disastrous effect.

“The Ajaokuta and NIOMCO projects have added vast amounts to our national debt. This is because successive governments conclude contracts that are then terminated without regard to the cost to the taxpayer occasioned by the damages payable for a wrongful and premature termination. The FGN has terminated on three occasion concession contracts with respect to Ajaokuta/NIOMCO,” said the Ministry of Mines and Steel Development.