Reps want oil benchmark at US$60 per barrel 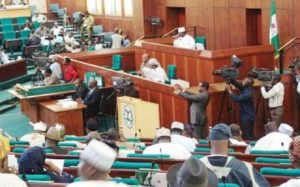 *Nigeria’s House of Representatives in session

Abuja — The House of Representatives has asked that the oil bench mark for the 2022 budget proposal should be set at US$60 per barrel.This will be different from the US$57 brought by the executive.

The House also called for zero allocation for government agencies who refused to implement the 2020 budget as appropriated.

This followed a debate on the 2022 budget proposal on the floor of the House on Wednesday in Abuja.

The News Agency of Nigeria (NAN) reports that some members of the House said that since the crude oil is put at US$80 per barrel, the benchmark should be increased to US$60.

Rep Leke Abijide (ADC-Kogi), stated that the benchmark of US$57 per barrel was a bit low, considering the US$80 per barrel as at now.

He added that it should be increased to US$60 dollar per barrel.

According to him, “aside this area, the budget is one of the best ever by the President and it deserve our commendation”.

He also commended the President for making capital projects a priority, while raising concern over the issue of borrowing and the exchange rate.

“With the exchange rate, what I did with my Zonal Intervention Projects (ZIP) last year, I may not be able to do this year because of the exchange rate and that is the only thing to perform in my constituency,” he said.

Rep Alhassan Ado-Dogwa, the Leader of the House, said that the 2022 budget is the highest in history and it is imperative to invest in infrastructure and agriculture.

Others, according to him include education, health, adding that they were the cardinal principle of Buhari’s administration.

He stated that the legislature, in partnership with the executive, must endeavour to sustain the January to December budget process.

He urged the various Committees to also work on oversight to ensure that the budget passed by the lawmakers and assented to by the executive is implementable.

Rep Onofiok Luke (PDP-Akwa Ibom), commended the House for sustaining the January to December budget implementation and working to ensure a cordial relationship with the executive.

He, however, said that the provision of N50 million for hazard allowance in the 2022 budget proposal for medical officers which was why they went on strike, would not augur well.

He commended the FG for capturing the hazard allowance in the face of COVID-19 pandemic, adding that medical officers were at risk because of their exposure.

“We have had a whole lot of brain drain in the last few years, there is need to up their hazard allowance from N5,000 to something that will boost the moral of medical personnel.

“We also need to be at pace with how the world is moving in terms of technology, in order to fortify our security personnel with requisite gadgets,” he stated.

He said that there was the need to ensure that the judiciary was well taken care of in the 2022 budget.

He said that the country’s debt servicing should be critically looked into, considering the astronomical rise in Nigeria’s total debt.

He added that the borrowing should be put into productive use such as power, road, public infrastructure among others.

Rep Sergious Ogun (PDP-Edo), called for the review of the budget performance quarterly by various committees in the House in view of poor budget implementation by government agencies.

“Are we really saying we are seeing changes in line with the yearly budget implementation?

“This will help us to put government agencies on alert, and where they are doing well we will commend and also give appropriate sanction where they are not,” he said.

Toby Okechukwu (PDP-Enugu), said that the yearly budget had always been a motion without movement, adding that “the subsidy regime baptized by under-recovery” is hurting the economy.

“We cannot continue to subsidize, there is no way we can commit debt to recurrent expenditure and still want change,” he said.

Rep Ndudi Elumelu, the Minority Leader, said, “I thank the House for living up to the expectation of Nigerians by committing the budget to debate, which means we are ready to move the country forward.”

He charged various committees to be up and doing by going to find out which projects were yet to be implemented by government agencies to enable the House do its work.

He added that their findings would inform what the lawmakers would do moving forward.
“My worry is the loan, but when loan is taking it should be for good purpose. We should look at how to strengthen power.

“On the issue of budget implementation, I want to say that the onus is on the committees. Because some agencies are refusing to implement the budget and I see no reason why we should continue to patronize such agencies.

“I submit that NASS should not give one naira to any agencies that have not implemented the budget.

“Funds from agencies which failed to perform must be moved to other areas like education,” he said.