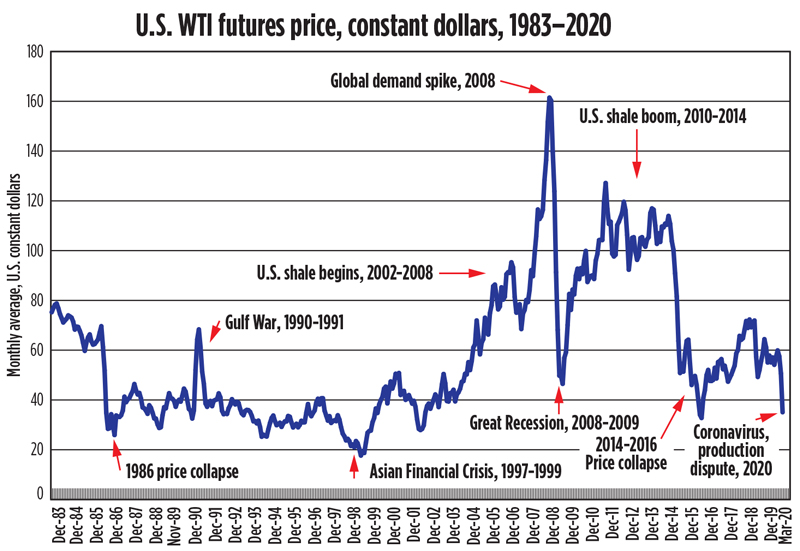 Houston — The oil price collapse of the last two weeks has reached near-record territory, according to World Oil’s analysis of historical prices in constant dollars.

Over the last week or so, World Oil has converted monthly averages for original (nominal) crude futures prices from 1983 to early 2020 into “constant dollars,” often referred to as “today’s money.” This enables an apple-to-apple comparison of average monthly oil prices at various times over the last 37 years.

Accordingly, in constant dollars, many industry veterans might think that the era of lowest oil prices was in the back half of the 1980s, after the early-1986 price collapse.

This can be seen clearly in the accompanying chart, showing the various highs and lows of WTI futures prices over a 37-year period.

In contrast, the lowest point that the monthly average constant dollars price fell to in the back half of the 1980s was $25.92, in July 1986.

Gulf nations, not us, to blame for oil prices fall – Russia

Our analysis shows that there have been five distinct periods of abnormally low oil prices, including the 1986 price collapse (1986-1989); the Asian Financial Crisis (1997-1999), the Great Recession of 2008-2009; the price collapse of 2014-2016; and the Coronavirus/Russian-Saudi price collapse of 2020. One could make the argument that right after the 9/11 attach in 2001, there was a noteworthy price dip, but it was of limited severity (roughly 25% drop in the worst month) and duration (only about six months).