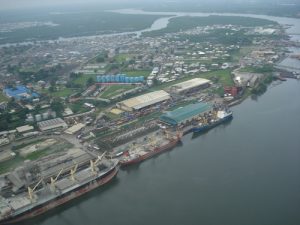 09 April 2018, Sweetcrude, Port Harcourt – Youths in Rivers State under the auspices of Rivers Youth Federation, RYF, have tasked politicians from Rivers State to join hands and revamp the two seaports in the state, so as to create employment for youths.

Chairman of the group, Mr. Maxwell Deinma, speaking with journalists in Port Harcourt, urged politicians in the state to stop playing politics with issues that will bring development and economic growth to the state.
Deinma said the Port Harcourt and Onne seaports have the capacity to create jobs and improve the economy of the state and the country at large, if well utilised.
He wonder why the two seaports in the state were still not operating optimally despite indigenes of the state holding sway as the Minister of Transportation, the Director General of NIMASA and a Director of Operations in the Nigerian Ports Authority, NPA.
“Rivers youths have successfully concluded to call on President Muhammadu Buhari and the governor of Rivers State, Nyesom Wike, and every politician in Rivers State to stop playing politics with Rivers economy, but should see how they can grow our state.
“We need the revamping of our Port Harcourt seaport and Onne seaport, so that jobs can be created for Rivers youths.
“If nothing is done about these, all politicians from this state will have Rivers youths picketing their houses this time around.
“Lagos seaports are already jampacked with cargo ships, while Port Harcourt and Onne seaports are empty and all we can do is to continue to play politics that has no bearing on our economic growth in Rivers State.”
The Rivers Youth Federation called on politicians in the state, irrespective of party affiliation, to use their office and prevail on the Federal Government to ensure optimal operations of the Port Harcourt and Onne seaport as soon as possible.
He said Lagos and other states in the country were already moving ahead economically while Rivers was still stuck in politics and political rambling.
“Every Rivers politician should show love to the youths; senators from Rivers State, House of Reps members, State House of Assembly Members, Minister, Heads of federal agencies and parastatals, you must use your office to show love to the state.
“We cannot have Rivers persons as head of NIMASA, Minister of Transportation and a Director of Operations in NPA, all in one sector, yet, that sector is not working for the good of our state.
“What do we have to show in Rivers State, for all we have given to the APC-led Federal Government and all we have given to PDP-led state government? What is that tangible thing that has been done for Rivers people?” Deinma queried.