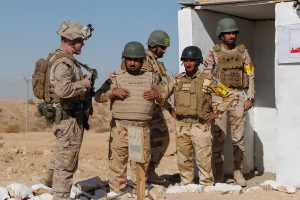 US soldiers in Iraq

Baghdad — Rival Shi’ite political leaders on Friday called for American troops to be expelled from Iraq after a U.S. air strike in Baghdad killed a senior Iranian general, in an unusual show of unity among factions that have squabbled for months.

The United States killed Qassem Soleimani, head of the elite Quds Force and architect of Iran’s growing military influence in the Middle East, in an air strike.

“We call on all national forces to unify their stance in order to expel foreign troops whose presence has become pointless in Iraq,” said Hadi al-Amiri, leader of the powerful Badr Organisation militia.

Despite decades of enmity between Iran and the United States, Iran-backed militias and U.S. troops fought side-by-side during Iraq’s 2014-2017 war against Islamic State militants.

With their help Iraq eventually succeeded in recapturing territory from jihadis who had overrun a third of the country.

Around 5,000 U.S. troops remain in Iraq, most of them in an advisory capacity. The militias were incorporated into government forces under the umbrella of the Popular Mobilisation Forces which Muhandis led.

A U.S. troop withdrawal could seriously affect the ability of Iraqi armed forces to fight remnants of Islamic State, which has launched an insurgency since its 2017 territorial defeat.

It could also mean losing access to U.S. military hardware, as well as vital air support.

Amiri leads a political bloc representing militia groups that has the second-largest number of seats in parliament.

Populist Shi’ite cleric Moqtada al-Sadr, who casts himself as a nationalist rejecting both U.S. and Iranian interference in Iraq and leads the assembly’s largest bloc, mourned Soleimani and called on all sides to behave with “wisdom and shrewdness.”

But he also ordered followers to be ready to protect Iraq, days after declaring his willingness to work with political rivals to end the U.S. military presence in Iraq through political and legal means.

Together the two men could muster enough seats to pass legislation in parliament, although that outcome is not certain and would depend on garnering support from other parties.

For Amiri to get his wish, parliament would need to pass a law obliging the Iraqi government to ask U.S. troops to leave.

It requires a simple, not absolute, majority, said Iraqi legal expert Tariq Harb, but at least 165 lawmakers must vote for a decision to be valid.

Sadr and Amiri together directly control 100 seats, not counting political allies, so those opposing any bill could block it by ensuring that a quorum of 165 is not present – a tactic often used in Iraqi politics.

Abdul Mahdi warned that the air strike was “a dangerous escalation that will light the fuse of a destructive war in Iraq, the region, and the world.”

Both Sadr and Amiri’s camps have signalled their readiness to use violence if politics fail to expel U.S. troops.

Qais al-Khazali, a member of Amiri’s coalition who leads one of Iraq’s most notorious militias in Asaib Ahl al-Haq, on Friday ordered his fighters to get ready for battle.

“All fighters should be on high alert for upcoming battle and great victory. The price for the blood of the martyred commander Abu Mahdi al-Muhandis is the complete end to American military presence in Iraq,” said Khazali.

Sadr’s militia staged two violent uprisings against U.S. forces after they invaded Iraq and toppled Saddam Hussein in 2003. Iraqi and U.S. officials at the time called him the biggest security threat in Iraq.

The prospect of further turmoil follows months of anti-government protests in which at least 450 people were killed as security forces and militia fighters sought to quell the unrest.

Anger on the streets was driven partly by the role of Iranian-backed militias in Iraq and of Tehran’s influence over Iraqi politics more broadly.