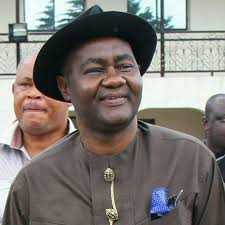 28 December 2017, Sweetcrude, Port Harcourt – Worried by the hydrocarbon soot ravaging Rivers State and its environs, the senator representing Rivers South-East Senatorial District in the National Assembly, Sen. Magnus Abe, has demanded that national health emergency be declared in the state over the soot.

Speaking in Kpite, Tai Local Government Area of the State, the lawmaker said the soot posed a great danger to the health of residents of Rivers State, and called for a summit of stakeholders to find a solution to the air pollution.

Abe noted that the time for politics was over and called on the State government and politicians in the state to unite against the scourge of the black soot ravaging the state.

According to him, “The real problem bothering Rivers people now is the soot. I think we should come together and look for a way to declare a national health emergency in Rivers State.

“You wake up in the morning, your car is black, you come back in the night your floor is black and if everything around you is becoming black, what will then happen to your lungs and that of your children? What is the impact of this thing or the long term consequences.

“I think we should suspend all politics and come together to arrest this situation in one way or the other.

“If we all come together and bring our federal connection and resources, the state brings its own resources and connections, we call in the academics community and the international community, we mobilize all the resources that we can put together, I believe that whatever is causing this problem, we can find a solution and bring an end to it.”

In a swift reaction, the Rivers State Government has attributed the appearance of soot in the atmosphere to the activities of oil and gas companies in the state, which it says falls squarely under the domain of the Federal Government.

Commissioner of Information in the state, Mr. Emma Okah, said all efforts by the State Government  to seek the cooperation of the Federal Government to find a lasting solution to the soot has not yet yielded any positive result.

Okah also called on the Rivers Caucaus in the National Assembly to set aside politics and draw the attention of the Presidency to the environmental disaster and the abandoned Ogoni clean up project in the state, in order to save the lives of residents of the state.

He regretted that while the rest of Nigeria was enjoying smooth hydrocaborn exploration, only a few bear the brunt of environmental hazard, degradation and air pollution as presently being experienced in the state.

According to him, “The issue of the Niger Delta environment should be a matter of great concern to every one of us, including those who represents the state in the National Assembly, irrespective of the political party that the belong.

“The Governor has repeatedly made it clear that he is willing and ready to work with any federal agency for the purpose of letting the people of Rivers state enjoy the benefits which other Nigerians are entitled to.”

Emma Okah particularly informed Senator Magnus Abe that the state government was ready to work with the federal government to deal with the environmental issues in the state.

“The Senate and indeed members of the House of Reps should come together and speak in one voice, and speak very loud on the issue of black soot in Rivers State as a matter of urgent national concern.

“If they do not do so with one voice, the APC-led Federal Government will continue to underestimate the seriousness that this environmental disaster poses. This is not a time for politics,” the Rivers State Information Commissioner said