Rivers communities get power supply after one year outage 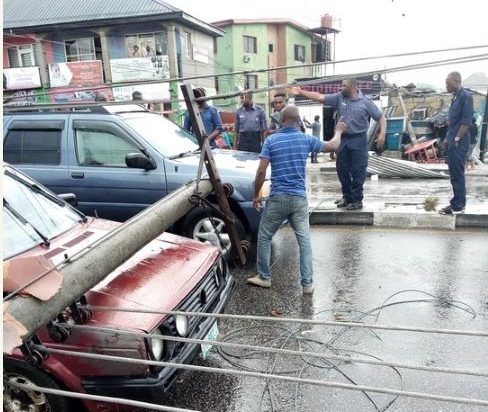 *Electricity distribution pole damaged by the rainstorm in Port Harcourt.

12 September 2018, Sweetcrude, Port Harcourt — After more than one year of complete power outage orchestrated by incessant vandalism, electricity supply has been restored to communities in Emohua and Ikwerre Local Government Areas of Rivers State.

The power restoration, according to the management of the Port Harcourt Electricity Distribution Company, PHED, was made possible by the Rivers State Government through its Ministry of power as well as the chairmen of the affected two local government areas.

Speaking, the Project Manager, Rivers State Ministry of Power, Mr. Eze Igwe, explained that the affected communities have been in darkness for over a year due to some damaged electricity facilities in the area, such as 33KVA transformers.

“The Electricity restoration was powered by the Rivers State Ministry of Power in conjunction with Ikwerre and Emohua Local Government Councils through direct labour.

“We want to thank the chairmen of Ikwerre and Emohua Local Government Areas who joined hands with the State Ministry of Power to make the installation of the damaged power line.”

For his part, the Chairman of Ikwerre Local Government Area, Mr. Samuel Nwanosike, explained that the restoration of power to the communities was part of his electioneering promises.

Nwanosike commended residents for their peaceful conduct while enduring the hardships they suffered as a result of the power outage they had to contend with for the past one year.

He debunked the speculations that the repairs and installations of electricity facilities in the area was carried out by the Federal Ministry of Power, Works, and Housing.

According to him, “During our electioneering campaigns, we promised to restore power to these communities and that is what we have done.”

For his part, the Chairman of Emohua Local Government Area, Mr. Tom Aliezi, urged the traditional rulers, elders, chiefs, and youths of the communities to safeguard the power installations from vandals.