on: August 11, 2020In: Community Development, featured

Port Harcourt — Umuakwuru community in Etche Local Government Area of Rivers State, has accused the Shell Petroleum Development Company of Nigeria Limited, SPDC, of neglect and abandoning the MoU it had with them, despite operating 150 oil wells in the community.

The community particularly mentioned that the construction of roads, townhall, water scheme, cottage hospital, school renovation, waste management facility and award of scholarships, which are in the MoU they had with SPDC, have all been abandoned by the Dutch oil firm.

Narrating the predicament of the community to newsmen, Paramount Ruler of Umuakwuru Community, Eze Innocent Nwosu, disclosed that SPDC escavated roads and drainage in the area, without reconstructing them, thereby leading flood and erosion in the area. 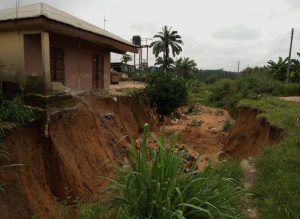 He called on Governor Nyesom Wike and the Niger Delta Development Commission to intervene in the matter and ensure that roads are constructed for the people in the area, as an oil producing community.

“We have other 150 oil wells here only in Igbor Kingdom, yet we do not have roads to most of the communities. Flood is a big issue we have here in Umuakwuru. Erosion has sacked some people in the community. This is caused by SPDC, who came here that they want to do projects in our MoU.

“SPDC handed this road to a company. The company came with their equipment and bulldozed everywhere. Since then we have not rested from flood.

“We took it as a duty, we have done many write ups and it didn’t work. We even went to court and court gave judgment in our favour and asked SPDC to go back and conclude the projects in our MoU, till today nothing has happened.

“SPDC came with a project called IWMF (Integrated Waste Management Facility) and also abandoned the site. The IWMF project site has turned to safe haven for criminals and kidnappers, we can’t go there again. That place is now kidnappers’ hideout and a problem to the community.

“It seems we have committed the highest sin in the whole world that SPDC will leave us like this. We see SPDC collecting our oil, not that we are sleeping, yet there is no road, no light no water in an oil producing community. It is painful.”

Meanwhile, the Shell Petroleum Development Company of Nigeria Limited, has affirmed her commitment to the development of its host communities, saying that the GMoU strategy continues to enable her host communities to take charge of their own development with the assurance of the company’s secure funding.

SPDC Spokesperson, Mr. Michael Adande, reacting to the allegations by Umuakwuru community, said though the company does not have any facility in the community, the construction of the IWMF was stalled due to opposition from some leaders of the community.

Adande, however, admitted that the construction of the road and drains were abandoned by SPDC as they were not community projects, but rather projects associated with the IWMF, thus were discontinued when the project was stalled.

“SPDC does not have any facility in Umuakwuru Community. The proposed Integrated Waste Management Facility in the community, a project started in 1999, was discontinued following strong opposition from some community leader.

“Despite the discontinuation of the project, Umuakwuru, Okoche and Chokocho communities were still included in the three phases of the Etche 1 Cluster GMoU resulting in the following benefits to the communities: