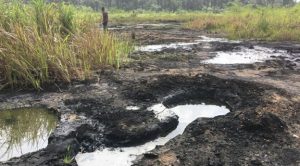 *An oil spill-impacted site in Ogoniland.

27 June 2018, Sweetcrude, Port Harcourt — A group known as Andoni Friends of the Earth has threatened to drag the Federal Government to court for failing to include every community affected by hydrocarbon pollution in the implementation of the UNEP report on Ogoniland.

The group explained that communities in Andoni Local Government Area of Rivers State were listed in the UNEP report as having suffered from oil pollution that occurred in Ogoniland and wondered why their communities have been excluded from the current plans to clean up Ogoni by HYPREP.

Speaking while briefing newsmen in Ngo Town, headquarters of Andoni, coordinator of the group, Mr. Fred Okpanuwo, said that oil pollution in Ogoniland are felt more in the riverine areas which is inhabited by the people of Andoni.

Okpanuwo explained that since Andoni and Ogoni live within the same geographical area, the federal government would have considered Andoni in the clean up of Ogoniland, stressing that there is no way oil will spill in Ogoni without affecting the waterways in Andoni.

He disclosed that most Andoni communities have lost their sources of livelihood as the spills have affected all their waterways, adding that all aquatic organisms, including fishes, have been killed by the spills from the Ogoni area.

According to him, “the major oil spills in Ogoniland are within the boundaries of both Ogoni and Andoni communities.

“We are giving the Federal Government and its collaborators three months to include Andoni communities in the cleanup or we drag them to court.”