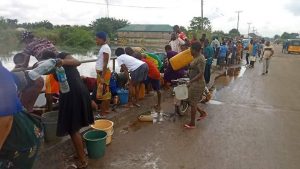 Port Harcourt — Obrikom community in Ogba/Egbema/Ndoni LGA of Rivers State, has called out for government’s intervention following an oil spill from a facility operated by the Nigerian Agip Oil Company, NAOC.

According to the community, the oil spill which occurred since last week, has grossly affected the Oshimil river in the area, and nothing was been done about it by the Italian oil firm.

The Secretary General of Omoku City Council Chiefs, Martins Olowu, said dozens of people in community are affected due to oil spillage, emphasising that the entire community are in dire need of government intervention.

Olowu also blamed the federal government for keeping silence on the continuous oil spill from oil firms operating in the area, and in the Niger Delta in general.

“Such thing as we are seeing here will continue to happen unabated. The federal government is silent, that is why we seek this opportunity to draw the attention of the state government to what is happening to us. We cannot continue like this.”

Also, some residents of the community who are mainly peasant farmers and fishermen who spoke to our correspondent said the oil spillage has affected their economic activities.

One of them said, “There is no longer fish in the river, we set our nets but no fishes because of oil and gas on the water. If you plant cassava, it will not yield properly as a result of pollution.”

“We just want the government to help us to remove the oil from the river, so we can we can be able to go back to our normal life of fishing for a living,” another one said.

Meanwhile, the Rivers State Government  has appealed for calm,disclosing that a joint team has commenced investigation on the matter.

Commissioner for Environment, Igbiks Tamuno, who confirmed there was a lot of devastation caused by the oilspill, said actions will be taken was the JIV was concluded.

“There is a lot of devastation occasioned by the oil spillage through the facility of NAOC. Three days ago we got wind of it and we took steps. As we speak,a joint investigation is going on between the state government and Agip.

“Without any presumption, we expect that we will get the reports and we will take action from there.

“I must once again thank the leaders of Omoku community, the youths and everybody that has behaved themselves by not taking the laws into their hands.”