Rivers council boss to clamp down on adulterated petrol dealers 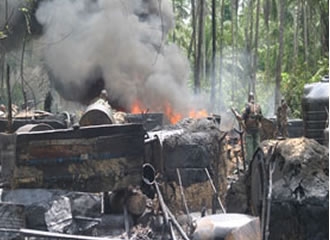 *An illegal crude oil refining operation in the Niger Delta.

04 January 2019, Sweetcrude, Port Harcourt — The Bonny Local Government Council in Rivers State has threatened to clamp down on those engaged in the sale and transportation of illegally refined petroleum products, popularly called kpo-fire, in the area.

The threat comes as two children have been lying critically ill in Bonny General Hospital, as a result of severe burns sustained from an explosion from adulterated petrol stored at home by their father, one Mr. Harry.

Speaking at the Bonny General Hospital, while visiting the first babies of the year in the company of the wife of the Executive Chairman of Bonny LGA, Mrs. Tamunosa Irimagha, Barasua sympathized with the two children severely burnt by kpo-fire explosion.

Barasua said she was moved by the severe burns on the two kids, a boy and girl, who were victims of a fire incident resulting from the explosion of adulterated petroleum products stored at home by their father.

She warned against illegal petroleum products merchandise, reiterating the firm resolve of the Executive Chairman of the LGA, Engr. David Irimagha to clamp down on such life-threatening businesses.

Touched by the condition of Mr. Harry and his family, who were currently homeless and indebted to the hospital, the Vice Chairman promised to influence some support for their rehabilitation.

However, Mr. Harry upon interrogation admitted to having kept several gallons of adulterated petroleum products indoors which was his means of livelihood.