Why Rivers economy is not improving – Peterside 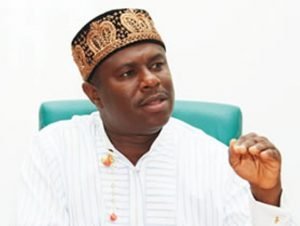 06 March 2018, Sweetcrude, Port Harcourt — The Director-General of the Nigerian Maritime Administration and Safety Agency, NIMASA, Dr. Dakuku Peterside has said that Rivers State has no reason not to be a prosperous state owing to her geo-strategic location and abundant oil and gas reserve.

The former governorship candidate of the All Progressives Congress, APC in the state, who disclosed this at a meeting with Rivers-based professionals in Port Harcourt, said geo-strategically, Rivers State was one of the two states in the country with two seaports, the Onne Seaport, and the Rivers Port Complex, with several terminals, where ships berth and leave the country.

Peterside who was the Guest Speaker at the event tagged ‘Business Rivers’, regretted that the latest data released by the National Bureau of Statistics, NBS, shows that the state was number one in unemployment and underemployment in the country.

Peterside who decried that unemployment rate in the state has risen to 41.82percent as against 20percent in 2010, said the way forward was for Rivers people to hold their leaders accountable.

Dr. Dakuku Peterside also said the data released by NBS which puts Rivers State as number one in unemployment and underemployment in the country, was not a product of political calculation, but a product of scientific research by the bureau which was verifiable.

“These are some of the indicators of our economy. In industrialization, in 2010, the Gross Domestic Product of Rivers State was $21billion, while that of Lagos State was $31billion. But today, the GDP of Lagos after seven years is $91billion, while that of Rivers State today is $22billion. Which means that in Lagos, the volume of products and services have grown three times in a period of seven years, while Rivers has grown by only $1billion.

“This is where we are; these are the indicators of the state of our economy. When you say people are leaving Port Harcourt in droves, or businesses are not thriving, these are the indicators. What went wrong? What went wrong are the choices we have made. The economy is a function of policies; policy is a function of politics. Politics determines the kind of leaders that we have.

“The same way the human body cannot function without the brain, the policy, a state, or a subnational cannot function without leaders. Leaders make decisions that affect outcomes. If we make a set of decisions, it will give us a set of outcomes. If we make different decisions, it will give us a different outcome, whichever choices we make, influences the actions we get,” Peterside said.