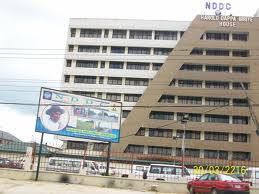 27 April 2018, Sweetcrude, Port Harcourt – The Rivers State Internal Revenue Service, RIRS – an agency of the Rivers State government – on Thursday shut the head-office of the Niger Delta Development Commission, NDDC, in Port Harcourt, for allegedly evading tax of over N600 million.
But, the RIRS officials who were at the head-office complex later vacated the premises.
Executive Chairman of RIRS,  Mr. Adoage Norteh, said the tax evasion was since 2013, adding that the amount was not less than N600 million.
Norteh explained that every effort to get NDDC to pay the withheld taxes has proved abortive, which led to picketing the premises, warning that failure to pay the owed money, would lead to outright seal off.
He added that the picketing was not political, stating that RIRS decided to pull out later, following the intervention of some individuals on the promise that the money would be paid at the stipulated time.
According to him, “NDDC is owing the Rivers State Government withholding tax; that is, taxes they withheld from vendors. They owe this money and we have been on it for a very long time and they have not responded to any entreaty.
“What they have agreed to owe won’t be less than N600 million. Withholding taxes are shared between federal government and states depending on to whom is withheld”.
He continued: “The tax we are talking about dates back to 2013. We are saying just pay all this money, unless they are saying the reason they didn’t pay was political.
“It has nothing to do with politics, I am not a politician. Nobody dictates to me how to do my job, I have been given free hand to do my job. Tax has no party card or logo.
“It is unfortunate we live in a place where whatever you do is tied to politics. But, we all cannot be politicians. There are people, who are politically naive, I am politically naive.
“We did not seal the place, we picketed it. If they don’t respond on time, we will go and seal it. We have pulled out yesterday, after the intervention of so many persons within the promise that they would pay.
“So, we gave them a few days. If they don’t meet up our demand within the agreement they appended to, we will have no other option than to now seal the place completely.  The place will be opened as soon as we get our money,” the RIRS Chairman said.
Meanwhile, the Director, Corporate Affairs of NDDC, Mr. Ibitoye Abosede, who described the development as resulting from communication gap, said the matter has been resolved and normalcy has returned to the Commission.
According to him, “The issue has been amicably resolved. It is  just a communication gap.
“You can observe that there is nothing like sealing off the premises; normalcy  has returned to the Commission’s activities.”