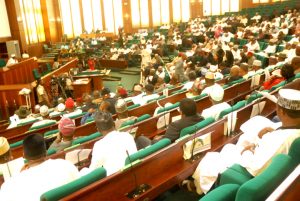 14 March 2018, Sweetcrude, Abuja – The Revenue Mobilisation Allocation and Fiscal Commission (RMAFC) has urged the National Assembly to be mindful of the constitution in its bid to legalise an account to capture all excess revenue.

The Acting Chairman of RMAFC, Alhaji Shettima Abba-Gana said this in an interview on Tuesday in Abuja.

The House of Representatives recently moved to legalise the Excess Crude Account, by proposing a bill to capture all excess revenue in an account to be called Excess Revenue Fund Account (ERFA).

The bill, which has passed second reading, was proposed by a member of the House, Lovette Idisi.

According to the proposed bill, no money shall be withdrawn from the account except it is approved by the National Assembly.

The existing ECA, which has been mired in controversy over the years, is owned and managed by the Federal, States and Local Governments.

The Federal Government remits any crude oil revenue in excess of the budgeted crude oil benchmark for the current year into it.

Abba-Gana, however, said that the account was non-existent in law, adding that the three tiers were accountable to each other and took decisions on how the money is disbursed.

He said, “Yes the account does not exist in law, but if the shareholders decide to do what they want, then it is them that decided, and the sharing will have to follow their ownership of that fund.

“That is why before the funds will be used, the 13 per cent of the oil producing states must first be removed because that is the first charge on any revenue, and then the balance is to be shared to everybody.

“If it is only one tier that sits down and decides what to do with the ECA, that would be absolutely illegal, but if the three come together then it is understood that the owners decided to use the funds in a particular form.

“If they all say that all the money in it should be shared immediately it is generated, all well and good, but if they say they will save it and distribute it when it is needed, that is also good as long as the decision is that of all of them.”

Regarding the proposed ERFA by the National Assembly, he said that if it was to be established by the stakeholders (Federal, States and Local Governments), it would be a sub account of the federation account, which was the way RMAFC would regard it.

He, however, advised the National Assembly to be careful so that it does not violate the constitution.

Abba-Gana said: “The constitution is very clear and it is good for them to study it to know what can be done within the current structure before they go and pass a law that negates or violates it.

“The constitution is very clear on how the money should come, who owns it and how it should be spent, so the National Assembly cannot dictate the management of these funds when it cannot decide for states and local governments.

“I do not think the National Assembly should go and pass a law that does not satisfy the constitution because it is the primary document that everyone swears to uphold and defend and you cannot do anything outside it.’’

RMAFC was established to monitor accruals into and disbursement of revenue from the Federation Account, review from time to time, the revenue allocation formula and principles in operation to ensure conformity with changing realities.