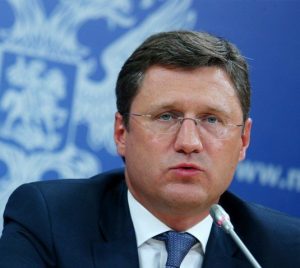 Russia is one of the world’s biggest crude oil and natural gas producers, and the United States has been urging global energy producers to boost output to stem an increase in prices.

“We met. We discussed energy issues, among other things. We touched upon questions related to sanctions,” Novak said in a press briefing in Washington. “We can’t sidestep these difficult questions, so of course we touched upon them during our contact.”

The meetings occurred while energy executives and ministers from around the globe converged on Washington for the triennial World Gas Conference, the industry’s biggest summit.

The U.S. Congress imposed economic sanctions in recent months against Russia that – among other things – seek to prevent companies from participating in Russian pipeline projects or oil and gas development efforts.

The sanctions were designed to punish Russia for its 2014 annexation of Crimea from Ukraine and for meddling in the 2016 U.S. presidential election. Moscow denies it interfered in the election.

Russia depends heavily on pipeline networks to get its energy production to European markets, and is also keen to develop energy reserves in its Arctic.

Novak has said in the past that the United States should not be permitted to impose such sanctions without a vote of the United Nations Security Council, of which Russia is a permanent member.

The United States has been urging increased supply from the world’s biggest producers, including OPEC members, to help stem an increase in oil prices that threatens economic growth.

It is also renewing sanctions against OPEC-producer Iran after abandoning a global deal meant to stem its nuclear ambitions, and urging consumers of its oil to stop their imports completely – another factor pushing up oil prices.

Perry told reporters on Monday, before meeting with Novak, that he was “amenable to having conversations, to creating a relationship” with Russia.

“He had invited me to, actually, to come visit some of the things that they are doing in the Arctic,” Perry said.

“I think we’ve got our issues with Russia, but I’m one of those that believe you need to be having conversations with folks and finding places that we can work together.”