London — Russian fuel oil arrivals in the UAE oil hub of Fujairah are set to jump sharply to about 2.5 million barrels this month, data shows, in a sign that flows of Russian oil and refined products are shifting away from Europe. 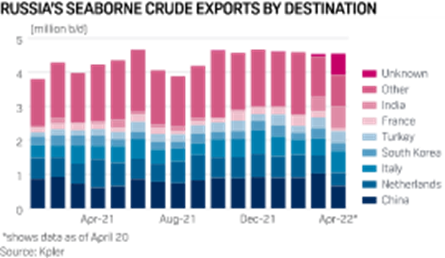 The arrivals in May are about 125% higher than April levels, and about 24% higher than a recent record in November 2021, the data from oil analytics firm Vortexa showed.

Russian fuel oil exports from the Black Sea ports of Taman and Novorossiysk to Fujairah are fairly common, but Baltic exports are much rarer and those flows have jumped sharply in April and May, the data showed.

One trader said the increased volumes were mainly going into the bunkering pool in Fujairah- the world’s third largest bunkering hub after Singapore and Rotterdam.

Trading Russian crude and oil products has become more difficult as Western buyers avoid it in response to the Ukraine conflict.

Large companies, including Shell, BP and TotalEnergies have already said they have stopped buying cargoes of crude oil and refined products of Russian origin.

Major global trading houses are planning to reduce crude and fuel purchases from Russia’s state-controlled oil companies as from May 15 to avoid falling foul of European Union sanctions on Russia.

Fuel oil, is a by-product of refining crude oil into lighter, cleaner products like road fuels and is used as a shipping fuel, in power generation, or as feedstock for some refining units which upgrade it into other fuels.