Lagos — The Russian aircraft again fired missiles at Odesa region, repeatedly hitting the Moldova-flagged Millennial Spirit tanker which drifts in the Black Sea without a crew.

“Two Kh-31 missiles were launched from Su-30 aircraft during yet another airstrike at Odesa region. One missile hit the Millennial Spirit tanker (Moldova-flagged), which drifts in the territorial sea without a crew and with the remains of diesel fuel on board,” Serhiy Bratchuk, spokesman for the Head of the Odesa Regional Military Administration, posted on Telegram with reference to the Operational Command “South”. 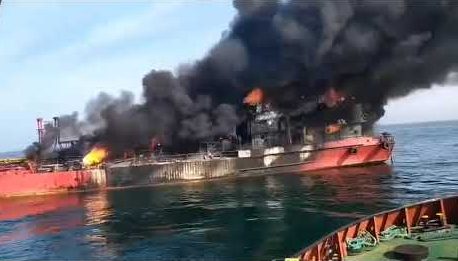 The Operational Command notes that Russian warships in the Black Sea fired upon the tanker at the beginning of the Russian invasion of Ukraine in 2022.

Currently, the remains of the cargo are probably being burned. At the time of the first hit, the ship carried more than 500 tonnes of diesel fuel. As Russia blocks shipping, the tanker has been drifting in the sea without a crew for four months like an ecological time bomb.

The second missile self-destructed over the sea, the Operational Command “South” informs.