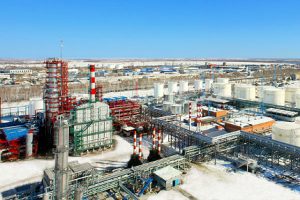 Moscow — Russia’s Antipinsky oil refinery said on Monday it had filed for bankruptcy, weeks after a London court ordered its assets be frozen in response to a lawsuit from a trading house.

The refinery, which has a capacity of 9 million tonnes per year, had halted operations on several occasions in recent months because of a lack of funds to pay for crude oil deliveries, according to industry sources.

Last month, a London court issued a worldwide order to freeze 225 million euros ($251 million) in assets belonging to the refinery in response to a lawsuit by Russia’s VTB Commodities Trading.

The court order applied to the refinery’s equipment and property in Russia’s Siberian region of Tyumen, as well as petroleum products stored there and at one of its tankers in the northern port of Murmansk, among other assets.

The order also forbade the refinery from selling vacuum gas oil (VGO) to other companies without the consent of VTB Commodities Trading.

Court data on Monday showed there were 346.5 billion roubles ($5.37 billion) of claims against the refinery.

The refinery, which last month announced plans to file for bankruptcy, alleged its insolvency was in part tied to the fact that some traders had stopped making advance payments for oil products.

“Unfortunately, in 2019 a string of traders, including VTB Commodities Trading, in violation of agreements that had been previously reached, stopped providing advances for the purchase of petroleum products,” the refinery said in a statement.

“This led to a decrease in the volume of purchased oil and to the plant stopping its processing on April 26.”

VTB had to apply to the court and discontinue financial support of the Antipinsky refinery as it did not fulfil contractual obligations to VTB for several months, the bank said in reply to a Reuters query.

Sberbank, the refinery’s main creditor, said in a statement it would protect its interests by “using all debt collection instruments.”