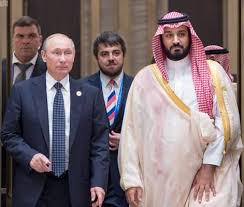 Moscow — Russian President Vladimir Putin and Saudi King Salman spoke by telephone on Monday and said they were satisfied with how the deal between OPEC and non-OPEC producers to limit oil output was being implemented, the Kremlin said in a statement.

The two leaders said the deal had generally stabilised global energy markets and they agreed to continue coordinating action, it said. They also discussed the joint production of Russia’s planned COVID vaccine, it added.