Johannesburg — South Africa’s coal sales to Europe rose eight-fold during the first half of 2022 compared with last year as demand for the fossil fuel surged ahead of a ban on Russian coal, Thungela Resources (TGAJ.J) said on Monday. 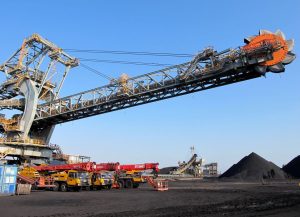 *One of the two new rail-mounted stacker reclaimers which scoop up and transfer coal into and out of the yard is seen at Africa’s largest coal export facility, the Richards Bay Coal Terminal, Richards Bay harbour, South Africa. REUTERS/Tanisha Heiberg

In April, the European Union announced a ban on coal imports from Russia as part of sanctions for its invasion of Ukraine. The ban came into effect on August 10. read more

Ahead of the ban, European countries, which previously imported 45% of their coal from Russia and have been switching away from expensive natural gas to coal, started to source the fossil fuel from other countries, including South Africa.

“It’s worth noting that coal exports from RBCT into Europe have increased by about 720% from half a million tonnes in H1 2021 to 4.1 million tonnes in the first half of 2022,” Thungela Chief Financial Officer Deon Smith said during an investor call.

“At the same time, exports to Asia from RBCT dropped by 17% compared to the first half of 2021,” he said, adding that enjoyed a freight advantage over Australian and South American coal, he added.

Thungela said the high demand had driven its realised average price to $240 per tonne during the half-year to June 30, compared to $75 a tonne last year, boosting its profit more than 20 times versus the year before.

The company, which was spun off global mining giant Anglo American Plc (AAL.L) in June 2021, said it would return 8.2 billion rand ($503 million) to shareholders after declaring a dividend of 60 rand per share, driving its share price more than 6% up.

Thungela CEO July Ndlovu, however, said South Africa could not fully take advantage of the strong coal demand due to the limited capacity of the state-owned rail company Transnet to haul the mineral to port.

As a result of the rail woes, Thungela has revised its production guidance for 2022 to between 13 and 13.6 million tonnes, from the previous 14-15 million range. The company is exploring the possibility of using trucks to haul coal to port.