SA, Russia nuclear deal one of many energy-related agreements

28 September 2014, Sweetcrude, Tshwane – The inter-governmental agreement regarding nuclear energy signed between South Africa and Russia is one of over 60 different energy related co-operation agreements signed by the Department of Energy on behalf of government.

The agreements address different aspects of energy and the usage of different energy sources. 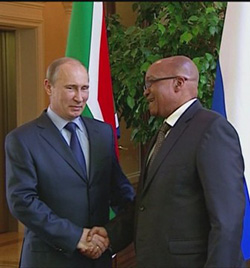 “The Intergovernmental Agreement on Strategic Partnership in Nuclear Energy is focusing on Russian-technology multi-purpose nuclear research, assistance in the development of South-African nuclear infrastructure, education of South African nuclear specialists in Russian universities and other areas,” said the Department of Energy in a statement on Saturday.

The department said it had noted the on-going public discourse around the agreement it signed on behalf of government with Russian state-owned company, ROSATOM.

The agreement was signed on 22 September during Minister of Energy Tina Joemat-Pettersson’s attendance at the 58th Session of the General Conference of the International Atomic Energy Agency (IAEA).

“We wish to state that this agreement is not the first of such agreements that our department has signed. The South African government, in its normal course of work, signs different agreements with governments or their state entities to enhance cooperation in different areas of mutual interest,” explained the department.

It noted the example of the agreement with the Democratic Republic of Congo in order to enhance strategic cooperation within the field of energy, more particularly to ensure that the Grand Inga Hydro project is taken forward.

“It is within this context that our agreement with the Russian Federation on nuclear cooperation is based … This cooperation agreement and the others we have, and further intend to sign with other countries, is informed by our Cabinet approved Integrated Resource Plan (IRP) 2010, which emphasises an energy mix which comprises of coal, nuclear, renewable energy, gas, hydro and other energy sources.

“The process of engaging with the thrust of the agreement with the Russian Federation as represented by ROSATOM, and the South African government as represented by the Department of Energy, will be subjected to the normal process of internal government and legislative scrutiny, and obviously, the public, the media, civil society and political parties will have an opportunity, through such processes, to fully comprehend the full details of the agreement,” the department said.

It further refuted all allegations of “undue influence” by President Jacob Zuma towards concluding the agreement, describing them as baseless and “at worst ludicrous, and they are purely concocted in order to tarnish the image and integrity of the President and the government of South Africa”.

The department assured all South Africans and interested parties that nothing will be withheld from them with respect to the agreement, as in the case with all other agreements previously entered between the South African government and other governments.

The department appealed that the necessary due process be allowed to run their normal course.
*SAnews.gov.za