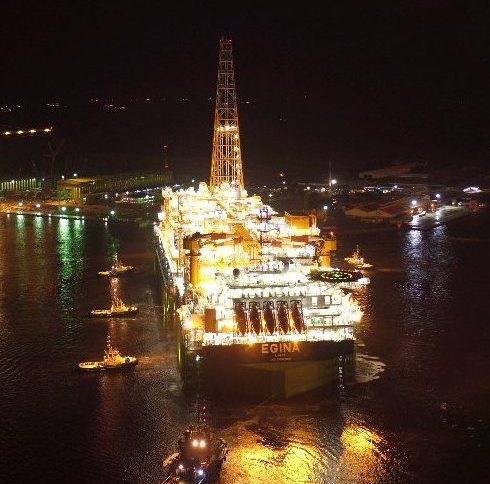 The contract for construction of the Egina FPSO was originally awarded for the sum of two billion nine hundred and ninety-three million, eight hundred thousand, five hundred and fourteen dollars, $2,993,800,514 billion.

Total Upstream Nigeria Limited, however, got to learn that all was not well when the construction of the Egina FPSO was completed in Geoje, South Korea.

Between September and December 2017, while the Egina FPSO vessel was still at the Samsung yard in Korea, even though the contractual fees including variations had been paid, Samsung decided to hold the to hold Total to ransom, demanding payment of an extra $1.65 billion as a precondition for release of the FPSO vessel.

However, Total refused to pay the extra cost, instead, paying $160 million before the Egina FPSO was allowed to set sail for Nigerian waters.

It was gathered that both Samsung and Total had agreed that before the FPSO departed the Ladol yard in Nigeria for its location on the Egina field, the outstanding variation claim would have been sorted out.

Following horse negotiations between both parties, Samsung reduced its ransom demand for $1.65 billion to $500 million but this money was not paid before the vessel was ready to leave the Ladol yard for the Egina field.

Samsung only allowed the Egina FPSO to leave the Ladol yard because an executive director of the Nigerian National Petroleum Corporation, NNPC threatened to to ban the company from doing any more work in Nigeria for the next 10 years if they refused to let the vessel leave the Ladol yard for the Egina field.

A ranking official of a Port Harcourt based engineering company who spoke on condition of anonymity disclosed that the vessel integration facility at the Ladol yard negates the business operating principles of Samsung because “they would have preferred to continue to undertake such FPSO integration in Korea.

“Samsung wants Ladol out of the yard because they want complete control to protect their ability to demand huge variations at will.

“The fight with Ladol is a distraction and a red herring orchestrated by Samsung to deceive the Nigerian public. What they really want is control of the Nigerian FPSO contracting market,” the official disclosed.

The Egina oil field has been developed by Total Upstream Nigeria Limited under a Production Sharing Contract, PSC, agreement with the Nigerian National Petroleum Corporation, NNPC.

Under this agreement, all the cost borne by Total would have to be recouped by the company under a cost recovery phase, an indication that the cost of development of the Egina field will be borne by the NNPC or the Federal government of Nigeria.