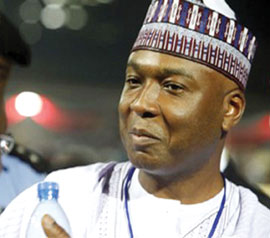 15 August 2013, Lagos – Barely 24 hours after he was granted bail, the grilling of ex-Governor Bukola Saraki by the Economic and Financial Crimes Commission, EFCC, is generating ripples.

The ex-governor’s questioning may not have been unconnected with his whistle-blowing on the N2.7 billion fuel subsidy scandal.

It was learnt that some government forces, who were angry over the expose, which Saraki led in the Senate, were behind the petitions sent to the anti-graft agency.

Some senators are said to be unhappy about the development, which they fear may affect the quality of legislative input.

It was gathered that the aggrieved forces were unhappy that Saraki had tried to prove that he had a clean record by raising the alarm over the fuel subsidy scam.

The Nation learnt that in the past one year, some individuals in government had been complaining about the attitude of the ex-governor, especially the role he played in “overstretching” the President Goodluck Jonathan administration on the subsidy scam.

Investigation showed that the aggrieved had made up their minds to deal with Saraki, leading to the digging up of the records on how the Societe Generale Bank of Nigeria, SGBN, went under.

The threats led to the engineering of some petitions against the ex-governor, with some interest groups used as a shield.

A source, who spoke in confidence, said: “Initially, the grilling of Saraki was assumed to be politically- motivated, but this theory was dismissed in some quarters, in view of the recent political rapprochement between him and the President.

“The President had met with Saraki on how to resolve the crises within the Nigeria Governors Forum, NGF, and the Peoples Democratic Party.

“But it is clearer now that some forces in government, who were hurt by Saraki’s whistle-blowing on fuel subsidy, decided to deal with him.

“They chose to ask the EFCC to revisit the failure of SGBN to prove that the ex-governor was not a hero he had assumed to be.

“Another angle to it is the fact that Governor AbdulFatai Ahmed of Kwara State had not been supportive of the forces against Governor Rotimi Amaechi. And since the governor worked with the SGBN, these forces opted to join issues with Saraki to send a signal to the governor that his former office is being probed.”

A source close to Saraki, who spoke on condition of anonymity, said it was amazing that the government was investigating the ex-governor on a matter already decided by the court.

The source said: “The Central Bank of Nigeria, CBN, was the complainant and it asked SGBN to recapitalise within a day. When SGBN could not meet up following the short notice, it went to court. The court ordered CBN to restore SGBN’s licence.

“While SGBN was asked to pay N1 billion to resume operation, the CBN came up with N25 billion recapitalisation policy.

“SGBN opted to source for N25 billion to recapitalise. But midway, the CBN initiated another policy of regional banking with N10 billion recapitalisation and SGBN became Heritage Bank.

“Even with the transformation into Heritage Bank, the shareholders in the defunct SGBN still have their shares intact. We cannot understand why the ex-governor is being haunted.”

Some senators, who spoke with our correspondent, faulted Saraki’s grilling.

A senator said: “We learnt that he is being interrogated over SGBN due to his exposure of the fuel subsidy scam. This development will affect legislative input.”

Another senator added: “We knew what we went through during the fuel subsidy scandal palaver. I am not surprised if Saraki is made a scapegoat because the revelations affected powerful interests.”