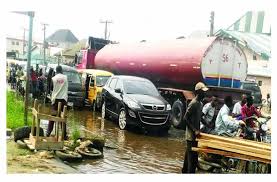 *Commuters, motorists, and petrol tankers struggle to find space on the narrow roads of Satellite Town.

22 January 2019, Sweetcrude, Lagos — The residents of Satellite Town under the aegis of Satellite Town Forum, has raised alarm over the invasion of its community by tank farm owners and terminal operators, a development that may have put the lives of over two million people in the community at risk.

President of the Forum, Mr. Michael Imitini, said some of these tank farms were built on the natural flood channel thereby causing flooding in the entire community whenever it rains.

He disclosed that some of the houses in the community are beginning to submerge as a result of the activities of the tank farms.

Imitini also disclosed that the community is demanding the relocation of these tank farms so as to save the community, its people and the environment from degradation.

The forum’s boss explained that despite their request to see the Environment Impact Assessment, EIA, Report for the construction of the tank farms, none of the operators have come forward to avail the community with their EIA.

According to Imitini, “Early last year, there was a fire outbreak but for the timely intervention of the fire service, the whole of the area and its people would have been history.

“Residents are moving out of the area, the value of properties is dwindling.

“Most tank farms are built on the natural flood channel which has caused most houses to get flooded whenever it rains and this has also led to some houses getting submerged.

“While we are still grappling with these tank farms, some people have started efforts to construct a container terminal in this community that has one way in and out.”

A visit to the town by our correspondent showed that about 12 tank farms have been constructed within the community while the second container terminal is undergoing construction.

An effort to get comments from Mr.Paul Osu, Public Relations Manager of the Directorate of Petroleum Resources, DPR, was futile as he did not take calls to his phone, just as he also did not respond to text messages.