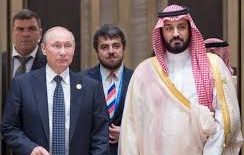 CALGARY — Saudi Arabia and Russia signaled they may be open to further output cuts after the latest OPEC+ deal to curb global oil supplies failed to stem crude’s downward spiral.

The two nations will “continue to closely monitor the oil market and are prepared to take further measures jointly with OPEC+ and other producers if these are deemed necessary,” Russian Energy Minister Alexander Novak and his Saudi counterpart Prince Abdulaziz bin Salman said in a joint statement published after a phone call.

Oil has plunged about 20% in New York since the group on Sunday agreed to trim worldwide production by an unprecedented 9.7 million barrels a day, as lockdowns aimed at containing the coronavirus cause the biggest demand slump in history. Prices hit a fresh 18-year low below $19 a barrel on Friday.

The Organization of Petroleum Exporting Countries projected on Thursday that even full implementation of the cuts won’t prevent a surplus in the second quarter, when demand for its crude will fall to the lowest in three decades.

The joint statement on Friday echoes earlier comments by Saudi Arabia’s bin Salman, who has said that his country is ready to cut oil production further if needed when the OPEC+ alliance meets again in June. “Flexibility and pragmatism will enable us to continue do more if we have to,” he said on Sunday.

The oil-price crash has been particularly painful for Russia. The nation’s coffers will get less than $1 for each exported barrel of oil, according to Bloomberg calculations based on data from the Russian Finance Ministry.

Riyadh signaled on Friday it was making a swift start to implementing its agreed cuts, with an announcement from state-run Saudi Aramco that it would supply customers with 8.5 million barrels a day as of May 1. That’s almost 4 million a day below planned sales in April.

Nonetheless, it’s uncertain whether the kingdom and its partners really have the appetite for further action right now.

The 8.5 million-barrel level represents a kind of floor for Saudi oil production because cutting any further would jeopardize output of associated gas, according to Helima Croft, head of commodity strategy at RBC Capital Markets LLC. Domestic gas demand for power generation has been rising sharply in the kingdom for years.

There’s also the signal Riyadh sent with its latest set of official selling prices, which fine-tune the cost that customers pay in relation to international oil prices. Aramco deepened the discounts for Asian buyers in May, an indication that it seeks to preserve its share of the fastest-growing market even as the production cuts take effect.

It’s questionable too whether the 23-nation OPEC+ coalition, led by the Saudis and Russia, has the appetite for renewed negotiations following this month’s epic bout. Reaching the agreement on April 12 took four days of contentious meetings, which included a walkout by Mexico and intervention by U.S. President Donald Trump.