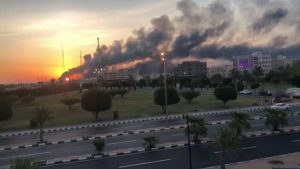 *Smoke plumes rising into the air from the Houthi attack on Abqaiq plant.

Crude output from the Khurais field is now at 1.3 million bpd and the Abqaiq plant is currently at about 4.9 million bpd, the sources said. On Monday, sources had said Abqaiq production was about 3 million bpd.

The Sept. 14 attacks on the two plants caused a spike in oil prices, fires and damage that halved the crude output of the world’s top oil exporter, by shutting down 5.7 million bpd of production.

Saudi Energy Minister Prince Abdulaziz bin Salman and the chief executive of state oil company Aramco, Amin Nasser, have said output will be fully back online by the end of September.

The attacks initially sent oil prices up 20% although they dropped soon after as the kingdom pledged to bring back output swiftly. On Wednesday, crude was down over $1 a barrel to around $62.
Also Read: New low-sulphur marine fuel trade begins in Singapore

The kingdom has managed to maintain supplies to customers at levels prior to the attacks by drawing from its huge oil inventories and offering other crude grades from other fields, Saudi officials said.
like us facebook