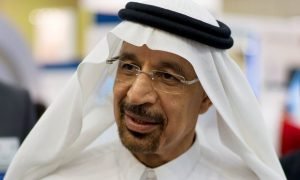 08 May 2018, News Wires – Saudi Arabian Energy Minister Khalid al-Falih has said he was concerned about possible shortages of spare crude oil output capacity, although he believes the market is in better shape after the OPEC-led production cuts that started in 2016.

Oil prices have surged as the output cut agreement by the Organisation of the Petroleum Exporting Countries (OPEC) and other producers, including Russia, has held. The main global oil benchmarks on Monday hit their highest since late 2014.

The recent upswing in prices – which has nearly tripled crude values from lows hit in early 2016 – has led to speculation that the output curbs will soon be lifted as countries reliant on oil revenue seek to boost their coffers by raising their exports.

“We are concerned about tight spare capacity nowadays … But we feel the industry is in better shape than when we started in 2016, and although we are seeing that improvement, we certainly don’t feel we are where we need to be with complete market stability,” Falih told Reuters in Tokyo after meeting Japan’s trade minister.

Spare output capacity will be among the topics discussed when OPEC and non-OPEC energy and oil ministers meet next month in Vienna, he said.

Falih said Saudi Arabia is not targeting a specific price for oil, discounting a May 4 report in The Wall Street Journal that Riyadh wants to oil to hit at least $80 a barrel this year.

“For sure we are not targeting a price. Our objective all along has been to bring stability, rebalancing and equilibrium back to the oil markets,” he said.