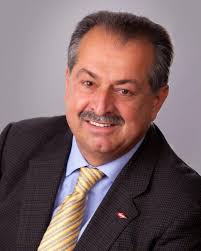 03 September 2018, News Wires — Saudi Arabia’s sovereign fund has named Andrew Liveris, the former chairman and chief executive of Dow Chemical, as a special adviser, in its highest-profile appointment of any global manufacturing executive.

Liveris will work closely with the Public Investment Fund (PIF) on matters of strategic importance, assist the fund in efforts to boost the value of its portfolio, and ensure the contribution of PIF companies to Saudi Arabia’s economic vision program 2030, the fund said in a statement on Sunday.

His appointment comes as the PIF, chaired by Crown Prince Mohammed bin Salman, is negotiating the sale of its majority stake in Saudi Basic Industries (SABIC) 2010 to oil company Aramco.

Liveris joined the Aramco board on July 1.

The PIF said Liveris had extensive experience working in Saudi Arabia over the last two decades and under his leadership, Dow DuPont worked with Aramco to develop the Sadara Chemical petrochemical complex.

The PIF, which manages more than $250 billion in assets, aims to increase its asset portfolio to $400 billion by 2020.

More than half of its assets are tied up in large Saudi companies, but the PIF has also made substantial overseas commitments. This included a $45 billion agreement to invest in a giant tech fund led by Japan’s Softbank and another $20 billion committed to an infrastructure investment fund planned with Blackstone.