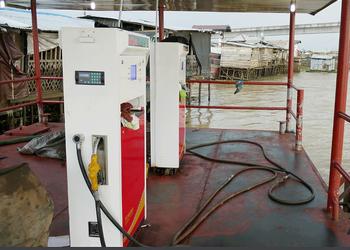 06 February 2018, Sweetcrude, Port Harcourt — The Ijaw Youth Council, IYC has raised the alarm that Premium Motor Spirits, commonly called petrol was currently being sold as high as N400 per litre in floating petrol stations across the coastal communities in the Niger Delta region.
The apex Ijaw youth group regretted that the same product was still being sold at N145 per liter in Lagos State and Abuja, while indigenes of communities who bears the brunt of oil exploration and exploitation are subjected to pay more for the product.
Spokesperson of IYC, Barr. Henry Iyalla, explained that the persisting fuel scarcity in the country does not only show lack of leadership and control of independent marketers, but speaks volume that the Federal Government has lost control of the regulatory price of N145 per liter.
Iyalla called on the Federal Government to urgently ensure the steady supply and regulation of price of petrol to the hinterlands and cities within the region.
“Our attention has been drawn to the continuous and persistent unavailability of PMS to Niger Delta States; more particularly the Riverine Communities were petrol is currently sold as high as N400 per liter and N250 per liter across petrol stations within the cities.
“To our minds, this is a deliberate act of oppression, abandonment and careless handling of the economic fortunes of the Niger Delta States and Ijaw Communities.
“It is unfortunate that the Department of Petroleum Resources has been compromised by the so-called petrol station owners who are openly allowed to sell fuel to motorist and individuals at N250 per liter while their petrol meters still reads N145  per liter.
“We expect the Minister for State Petroleum Resources Dr. Ibe Kachikwu who is also a Niger Delta son to know that petrol is sold N400 per liter on the floating stations around Riverine communities within the Niger Delta Region.
“We therefore, call on the President of the Federal Republic of Nigeria who is also the Minister for Petroleum Resources, the Minister for State Petroleum Resources and the Managing Director of Nigerian National Petroleum Corporation to as a matter of urgent National importance ensure the steady supply and regulation of price of PMS to the hinterlands and cities within the Niger Delta to assuage the suffering of our people from whose soil the mineral resources are extracted.”