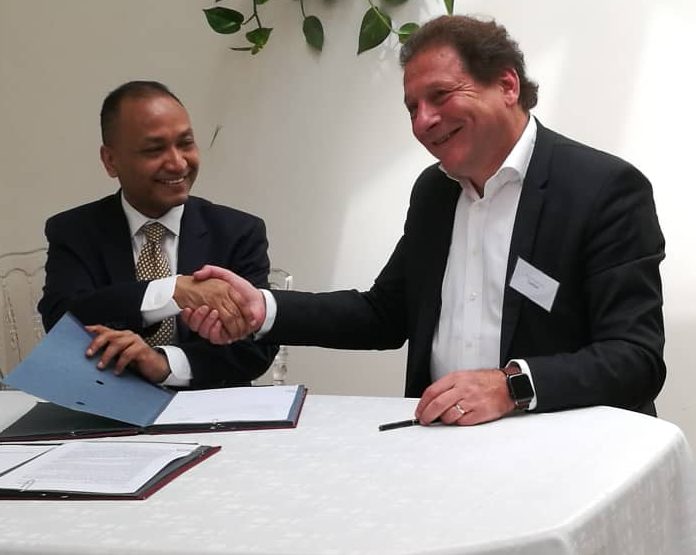 The MoU is in a bid to create an African mini-grid industry involving decentralized electricity generation and distribution networks based on renewable energy.

Prior to the signing, EM-ONE has been working to set up an industry based on mini-grids built or operated by local stakeholders for 18 months, which was led by led by its sustainability department.

It, therefore, led to a first MoU with EM-ONE Energy Solutions, a Nigerian company that also operates in Canada.

“EM-ONE Energy Solutions has already won a contract for 30 mini-grids in Nigeria to power hospitals in Kaduna State and is also targeting the university and rural electrification market.

According to the International Renewable Energy Agency (IRENA), West Africa’s energy consumption could quadruple by 2030 to reach 219 TWh a year, less than half of the 478 TWh already consumed in France in 2018. Part of the solution will come from mini-grids, decentralized networks powered by photovoltaic energy.

Demand is high: an estimated
200,000 mini-grids are required to power the continent and reach the United Nations Sustainable Development Goal 7 (“Ensure access to affordable, reliable, sustainable and modern energy for all”).

“Rather than importing mini-grids produced in Europe, Asia or North America, we want to create an African mini-grid industry with operators, integrators, investors and local jobs,” Paul-François Cattier said.

In the past 10 years, the Group has already installed 700 mini-grids in Africa, mainly for rural electrification, through its Access to Energy programme. This has largely been achieved with donations to NGOs and equipment often produced in Europe.

Schneider Electric will provide them with advice on setting up an industrial plant and testing.
The Group is also working with public and private funding bodies.

It intends to cover the full range of needs with capacities up to 500 kW (enough to power a city of 10,000 inhabitants in Africa) through its standardized solutions, and from 500 kW to 20 MW through specific architectures (for cities of several hundred thousand inhabitants that are without an electricity grid).

“Africa today is comparable to China 40 years ago. In 2050, it will account for 30% of the global population according to the United Nations and could be one of the world’s top 5 economic powers by 2050,” explained Paul-François Cattier.

The potential for electrification is enormous, not only in rural areas but also for companies who would like their own reliable electricity grid, including banks and their network of agencies and cash dispensers, food and beverage manufacturers, data centres and even electricity providers that currently use power generators and need to switch to hybrid energy production with mini-grids.