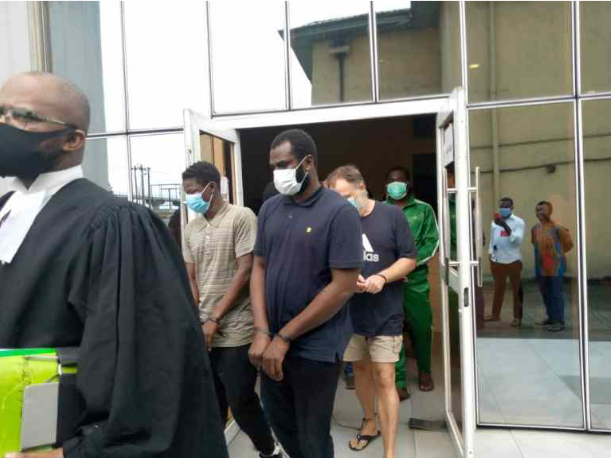 *The suspects filing out from the Port Harcourt Federal High Court

Port Harcourt — The Federal High Court in Port Harcourt, at the weekend remanded three foreigners and six Nigerians, who are staff of Pilgrim Africa Limited, for allegedly aiding and abetting kidnapping, sea piracy and concealing terrorism.

The suspected were arrested in May 2020, by operatives of the Nigerian Navy Ship, NNS Pathfinder, for facilitating the ransom of $200,000 to sea pirates, who had attacked an Equatorial Guinea flagged vessel, MV Elobey VI, off the coast of Equatorial Guinea and held the crew hostage.

The suspects, who are now standing trial on three counts against them by the Federal Government bothering on conspiracy, sea piracy and terrorism, were also involved in the transporting of the kidnap victims (who are also staff of the said company) to Calabar, Cross River State, after they were freed by their abductors, after paying the sum of $200,000.

The nine suspects pleaded not guilty to all the charges against them by the Federal Government, but the prosecuting counsel, Labaran Magaji, relying on section 216 of the Administration of Criminal Justice 2015, lamented that the suspects were those giving the country a bad name.

Magaji decried that many companies were already relocating out of Nigeria as a result of fraud, conspiracy and criminality of some Nigerians who are passionately painting the country bad, through their actions, like the suspects.

Meanwhile, the Defense Counsel, Abimbola Akeredolu, SAN, said the Federal Government was wrong to have kept the suspects in custody since May, 2020 without trial.

Akeredolu requested the court to entertain the bail application of the defendants which, according to her, was ripe for hearing, praying the court for an order admitting all the applicants on bail on liberal ground and favourable terms.

The Judge, Justice Mohammad Sani, who remanded the defendants to the Port Harcourt Correctional Centre, assured of speedy hearing of the matter and adjourned the matter till the 10th, 11th and 12th of August, 2020 for ruling on bail application and commencement of hearing.

Justice Sani also ordered the officials of the Nigerian Correctional Centre to ensure that all COVID-19 precautionary protocol are maintained in the admission of the suspects.