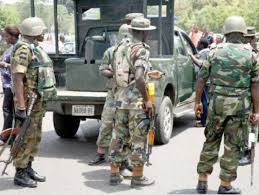 This came as the JTF said it has successfully destroyed 13 illegal refineries in Iyalama Adama, a border town between Rivers and Bayelsa State.

The Media Coordinator of the JTF, Major Abubakar Abdullahi, who confirmed the incident in a statement, however, said no arrest was made.

Abdullahi also said three soldiers sustained gun injuries, but efforts were on by the JTF to track the criminals.

According to the statement, “In continuation of its drive to accomplish its mandate, troops of Operation Delta Safe on patrol around Iyalama Adama area in Rivers State discovered and destroyed 13 illegal refineries.

“Effort is ongoing by the JTF to track and apprehend the criminals.”