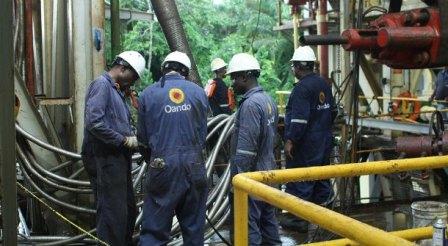 *Staff of Oando Plc. working on an oil rig.

25 October 2017, Sweetcrude, Lagos — The Security and Exchange Commission, SEC, has announced the suspension of trading in the shares of Oando Plc.

The suspension came following the public notice it issued on October 19.

In a statement yesterday, according to the commission, Oando’s Shares are no longer on full suspension but on technical suspension.

“Sequel to the Public Notice issued by the Securities and Exchange Commission on October 19, 2017, suspending trading in the shares of OANDO Plc, the Commission wishes to notify the general public that the shares of the Company are no longer on Full Suspension but on Technical Suspension.”

SEC also informed that arrangements have been concluded to commence investigation exercise, promising its “unwavering commitment” to protect all investors in the company and the integrity of the Nigerian capital market.

The Johannesburg Stock Exchange where the company’s Shares are also listed had also placed a suspension on Oando since October 19 following advice from the Nigerian bourse.

Meanwhile, Oando has remained silent since SEC announced full suspension and now partial suspension of its shares at the stock market.
The only update from the company on the matter was on same October 19 after SEC’s public notice.

In a statement signed by the company’s Chief Compliance Officer/Company Secretary, Ayotola Jagun, Oando acknowledged receiving the “communication” from both the Nigerian Stock Exchange, NSE, and SEC, adding that it was “reviewing” the letter and will reply as soon as possible.

“The Company (“the Company” or “Oando”) has received communication from the Nigerian Stock Exchange (NSE) that the Securities and Exchange Commission (SEC) have issued a directive to immediately suspend the trading of Oando shares, a directive to which the NSE has complied”.

“The Company is currently reviewing subsequent correspondence received today October 18, 2017, from the NSE and SEC and will provide a full statement of the Company’s position as soon as possible”.

“The Company remains committed to acting in the best interests of all its shareholders”, the statement had read.