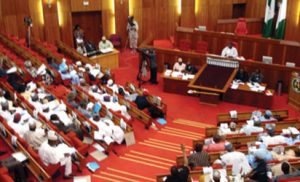 23 March 2018, Sweetcrude, Abuja – The Senate has confirmed five nominees of the Central Bank of Nigeria (CBN).

The nominees were confirmed after Rafiu Ibrahim, chairman senate committee on banking, insurance and financial institutions, presented a report at the red chamber on Thursday.

Mr. Asheikh Maidudgu was the only nominee rejected by the lawmakers.

The confirmation followed the adoption of the reports by the Senate Committee ‎on Banking, Insurance and Other Financial Institutions, which screened the nominees on Monday.

In the report on the MPC nominees presented by Chairman of the committee, Senator Rafiu Ibrahim, the panel said Maidugu was considered not qualified to occupy the position for which he was nominated.

“The nominee was interviewed by the committee and he responded to the questions asked by the members, but the committee was dissatisfied with his response to the independence required for each member of the MPC and concerned that a regular civil servant Iaden with bureaucracy and red-tapism may not be independent in his judgment on each crucial decision of the MPC that affect directly the whole economy,” the report stated.

In his remarks on the nominees, President of the Senate, Dr. Bukola Saraki, said, “At this point, let me congratulate the two nominees, particularly Mr. Edward Lamatek Adamu whose upliftment to a Deputy Governor will be a great encouragement to the staff of the CBN who will see one of their own in this position. I am sure it will boost the morale within the institution.

“Let me also commend and congratulate Mrs. Aishah Ahmad for her nomination to this very competitive role. The two new Deputy Governors of the CBN are coming at a time when the economy is a major issue. We have just come out of a recession and we need to continue with our economic growth and see the sustainability of the foreign exchange and other related challenges.

“We hope that the two new Deputy Governors will work with the Governor (Mr. Godwin Emefiele) to move the country and our economy in the right direction. We hope also, that you all will continue to work closely with the National Assembly to update us on the progress that is achieved by the CBN.”

The Majority Leader, Senator Ahmad Lawan, however, urged Buhari to nominate a replacement for the rejected nominee. He also urged the lawmakers to consider the President’s request for confirmation of CBN’s governing board nominees.

The upper legislative chamber had initially refused to confirm the nominees, stalling the monetary policy committee (MPC) meeting of the apex bank in January and March.

The lawmakers had said the only condition to confirm nominees of President Muhammadu Buhari is for the federal government to sack Mr. Ibrahim Magu, acting chairman of the Economic and Financial Crimes Commission (EFCC) in line with their recommendation.

But two weeks ago, the senate hinted that the nominees would be screened.

After this, Godwin Emefiele, CBN governor, disclosed that the first MPC meeting of 2018 had been fixed for April 3.