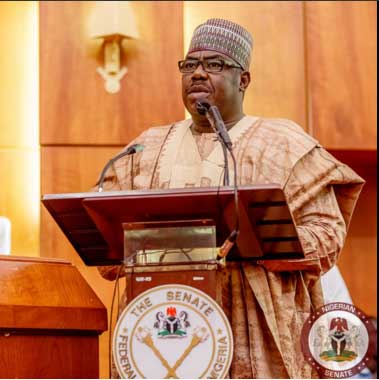 20 December 2017, Sweetcrude, Abuja – The Senate Committee on Power has alleged high level of duplication of items in the 2018 budget estimates of the Federal Ministry of Power, Works and Housing, describing it as embarrassing and unacceptable.

At a budget defense session with the Minister of State, Mr. Mustapha Baba Shehuri, and the Permanent Secretary, Mr. Louis Edozie, the lawmakers observed that N120 million, N480 million and N288 million were separately budgeted for the purchase of utility vehicles.

The ministry also earmarked N100 million for transfer and management of office files and documents.

“Year in year out, the ministry presents the same items in the budget and asks for more funds to execute the same projects,” the Senator Eyinnaya Abaribe-led committee said.

According to him, “I need to understand this thing. Look at the different pages, you earmarked N120 million, N288 million and N480 million for the purchase of vehicles. Are these vehicles different? If you add up these figures, they will give you about N888 million.

“You also said that you want to spend N100 million on the transfer of office files. How do you intend to do that? The people in your office, what have they been doing? I can also see from your estimates here that you captured another item for ICT, different from the N100 million for transfer of files. You need to explain these things.”

On his own part, Sen. Hassan Mohammed (Yobe) said the lawmakers were tired of being bombarded every year with the same items. He urged the ministry to put its house in order.

Meanwhile, Sen. Abaribe has panned the ministry’s performance on the previous year’s budget, even as revealed that the 2017 budget (capital) of the ministry only recorded 18 percent performance.

“We will take it that the 2017 budget was abysmally low at only 18 percent performance. This is unacceptable and I need to put it on record,” he said.

There was also mild drama when the minister could not respond to questions threw at him. Instead, he appealed to the committee to allow the permanent secretary provide the answers on his behalf. His appeal was rejected by the lawmakers.

“You were sent here to represent the minister. It means you are here to respond to our questions. Last week, we invited the permanent secretary to respond. Today, it is your turn.

“My colleagues asked me how come you are the person here and not the Minister of Power, Works, and Housing, Mr. Babatunde Fashola. But I told them since you were also a minister, you could be here on behalf of your minister,” Abaribe told Shehuri.

There was no official explanation of why the minister, Mr. Babatunde Fashola did not turn up. Shehuri simply said he (Fashola) was attending to other state matters.

Recall that Mr. Fashola was last Thursday walked out by the lawmakers over alleged “unpreparedness to face the committee for his 2018 budget defense.”

But speaking yesterday on Fashola’s non-appearance, Abaribe said: “Maybe he decided to snub us because of some media reports last week. But he ought not to have been angry by that. I am sure that was why he sent you, he did not want to come here.”

The panel chairman said Fashola must be present at the next budget defense session.