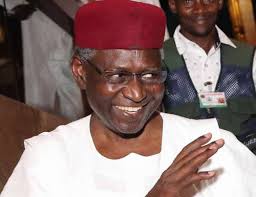 07 January 2018, Sweetcrude, Abuja – The Senate has slammed the Chief of Staff to the President, Mallam Abba Kyari, for comments he allegedly made during a meeting with stakeholders in the oil industry on the perennial fuel scarcity in the country that the National Assembly is behind the delay of debt owed to oil marketers as false.

The Chairman, Senate Committee on Media and Publicity, Senator Aliyu Sabi Abdullahi, noted in a statement that no such request has been made to it specifically requesting for a loan meant for payment to oil marketers by the presidency.

He said, “The Senate is aware that subsidy on petroleum had been canceled by this administration; so we wonder which payment we are talking about now.

“Senators have been inundated with calls from oil marketers who were present at the meeting with the Chief of Staff to the President on the issue and thus, we call on Mallam Kyari to either prove his claim or retract it.”

According to him, “It should be noted that a similar claim was made by the Minister of Finance on the foreign loan at a time the Presidency had not forwarded the request. The letter requesting for the foreign loan was submitted long after she was confronted with the fact.

“It is the opinion of the Senate that instead of resorting to false claims and shifting blames in the mold of ‘Blame Someone Else’, both the executive and legislature should work together to solve this unnecessary fuel crisis which is making life more difficult for our people.

“That is why members of the Senate Committee on Petroleum (Downstream) were mandated by the Senate President to suspend their recess and embark on oversight visits to key areas in the sector while it would tomorrow (Thursday, Jan. 4th) hold an investigative public hearing with all stakeholders aimed at finding solution to the problem of fuel scarcity.”

Meanwhile, the Senate Committee on Petroleum (Downstream) chaired by Senator Kabiru Marafa had invited the Minister of State for Petroleum, Dr. Emmanuel Ibe Kachikwu, and the Group Managing Director (GMD) of NNPC, Dr. Maikanti Baru, to come and explain the role of government in the on-going fuel scarcity still ravaging parts of the country.

Kachikwu and Baru were invited on the order of the Senate president, Dr. Bukola Saraki, who earlier directed the Senate committee to suspend recess and meet to find a solution to the fuel scarcity in the country.

Both the minister and NNPC GMD are expected to meet with the Senate at 12 pm on Thursday, January 4.

On its official Facebook page, the Nigerian Senate announced that: “Following a directive from the Senate President, Dr. Abubakar Bukola Saraki, today at 12pm, the Nigerian Senate’s Downstream Petroleum Committee, chaired by Senator Kabiru Marafa, will hold an oversight hearing with the Minister of State for Petroleum, Dr. Ibe Kachikwu; GMD of NNPC, Mr. Maikanti Baru; and industry stakeholders to proffer solutions to the #FuelScarcity.”

Senator Marafa, who opened the session said: “Like we all know, Nigeria has witnessed another unfortunate incident of fuel scarcity. We were able to tame the monster since our government came to power but it reared its head again. 2017 witnessed a fuel scarcity Christmas.”

Baru, while responding to Marafa blamed the scarcity on a rumour about the increase in the price of petroleum.He said: “The real cause of this unfortunate situation was the rumour about an increase in PMS price, which led to massive hoarding, diversion, and smuggling.”

Meanwhile, oil marketers have reportedly agreed to sell petrol at the pump price of N145 per litre. This is in reverse of an earlier decision made that it was not economically viable for them to sell at the price. During the meeting of the ad hoc committee set up by the presidency to get the oil marketers to restart the importation of fuel, they agreed to sell N145 per litre.