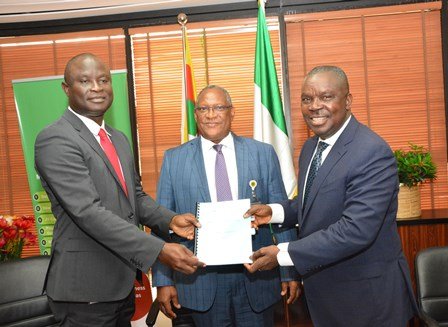 The signed Shareholder Agreement will govern SEPLAT and Nigerian Gas Processing and Transportation Company (NGPTC) respective interests in the AGPC incorporated Joint Venture. The execution of these Agreements is an important precursor to the Final Investment Decision (FID) for the ANOH project.

Speaking at the event, Group Managing Director of the NNPC, Dr. Maikanti Baru, represented by the Chief Operating Officer (Gas & Power), Engr. Saidu Mohammed averred that AGPC is being promoted by the NNPC and SEPLAT to develop, build, operate and maintain the Company as a world-class Organization delivering on its objectives.

Dr. Baru assured that the NNPC would provide the requisite support in ensuring the success of the AGPC initiative and urged the AGPC to strive towards delivering the project on schedule within budget and specification.

In his remarks, Chief Executive Officer of SEPLAT, Mr. Austin Avuru, explained that the ANOH Gas Processing Plant is a milestone project which aligns with the gas infrastructure development initiative of the Federal Government of Nigeria.

Mr. Avuru gave assurance that the AGPC would deliver the project on schedule within the next eighteen months and achieve its objective of being a major gas supplier to the domestic market.

He expressed appreciation to NNPC for the cordial relationship over the years between SEPLAT and its Joint Venture Partners that are subsidiaries of the NNPC.

The execution of these Agreements for the ANOH Gas project is a landmark attainment for SEPLAT and its subsidiary, AGPC, as SEPLAT leads the pack in gas production and delivery to the Nigerian domestic market.