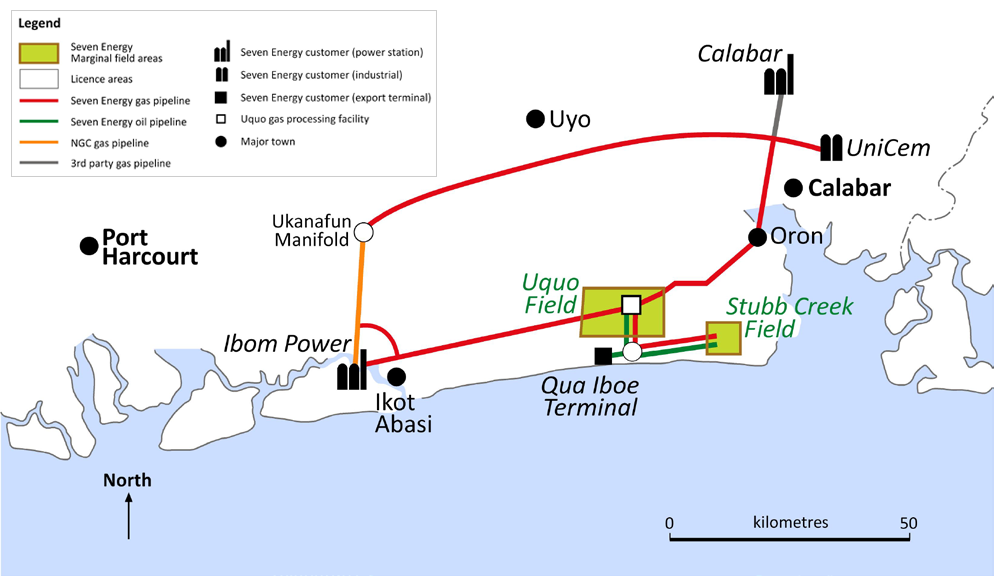 Lagos — Seven Energy and Frontier Oil have lost out in their gas-for-oil swap deal in the Uquo field located in southeastern Nigeria, to British Savannah Petroleum.

This move is in line with the ongoing process of British Savannah Petroleum PLC taking over Seven Energy’s assets as reported by SweetcrudeReports in August.

SweetcrudeReports had reported how Seven Energy will forfeit some of its assets to Savannah Petroleum PLC after securing ministerial consent to take over some of the former’s assets in Nigeria.

Seven which operates in Nigeria through its wholly-owned subsidiaries, Septa Energy Nigerian and Accugas, is headquartered in Lagos and London.

Following Seven’s indebtedness, SweetcrudeReports learnt that Frontier has given up on the business as the assets now belong to Savannah.
Final documentation has already been signed by Frontier Oil Limited and Seven Uquo Gas Limited SUGL and Accugas Limited (both now part of Savannah Petroleum) as regarding restructuring of ownership interests at the Uquo marginal field and the operatorship of the Uquo gas central processing facility (Uquo CPF).

“The Frontier Transaction will result in SUGL assuming responsibility for all operations (including production) of the gas project at the Uquo marginal field (including, inter alia, control of gas-related capital investment projects, design, and implementation of operations and production plans, as well as day to day gas operations at the Uquo gas field,) and will retain 100% of the revenue from gas sales”., Savannah Petroleum said in a statement.

In the new deal Frontier signed with Savannah, the firm now moves away from gas in the Uquo field into liquids- to control all oil-related activities in the field, retaining 100% of revenue from oil sales. Operatorship of the Uquo CPF will be on Accugas.

“The signature of the Frontier Transaction documentation represents the achievement of one of the final remaining milestones to be reached as we move towards completion of the Seven Energy Transaction”, according to Andrew Knott, CEO of Savannah Petroleum, adding that “the Frontier Transaction is of strategic significance, affording the Enlarged Group increased operational control across the gas value chain and enabling us to maximise value from the Uquo gas field.”

History of indebtedness
Savannah will now acquire the Seven assets and the restructuring of Seven’s existing indebtedness, specifically the gas for oil swap with Frontier Oil Limited, buy-out of minority shareholders in Universal Energy Resources Limited, the acquisition of an additional 55-60% interest in Accugas as well as the sale of a 20-25% (less one share) interest in Seven Uquo Gas Limited SUGL and Accugas to African Infrastructure Investment Managers AIIM. As a result, the indigenous oil and gas exploration, development, production, and distribution group entered into a transaction for a comprehensive capital restructuring, part of which is to sell most of its assets.

Seven Energy, in a statement in 2017, said Savannah Petroleum would acquire “substantially all of the valuable assets of the group, including, at its option, the Strategic Alliance Agreement, which is to be transferred to Savannah, its subsidiaries, or an entity to be nominated by Savannah, subject to completion of a financial restructuring of the group in accordance with the term sheets.”

It said new capital would be provided by Savannah with funding available for, among other things, operational working capital and the liquidity needs of the target group; cash consideration to be paid to selected creditors, including the SSN noteholders, and costs associated with the agreed transaction.

As part of the agreement, the SSN noteholders will receive their pro-rata share of $52.5m in newly-issued equity in Savannah and an $87.5m cash payment, in consideration for the discharge of all $318.2m SSNs and release of claims against the entities being acquired by Savannah.
In addition to the SSN consideration, the SSN noteholders will also be offered the right to subscribe, on a pro-rata basis to their holdings of the SSNs, for $25m worth of newly-issued equity in Savannah for a total cash consideration of $20m.

However, Savannah will not be acquiring Seven Exploration & Production Limited as part of the agreed transaction.

Savannah had to provide Seven with a “super senior” interim revolving credit facility of up to $20m in order for it to continue to operate its business until the successful completion of the transaction.

Seven Energy, which has been grappling with severe liquidity challenge, has announced its inability to make the interest payment due October 11, 2017, on two notes issued by Seven Energy Finance Limited.

It also announced that it had requested a standstill from its lenders under the $385m Accugas term facility dated June 23, 2015, and had not made payments of interest and principal due on March 31, 2017.

Its liquidity was severely affected by a range of external factors, including loss of material cash flow from its Strategic Alliance Agreement since February 2016 because of recurrent militant activity that resulted in the closure of Forcados export terminal, and a significant backlog of unpaid invoices relating to the supply of gas to federal and state-owned power stations.