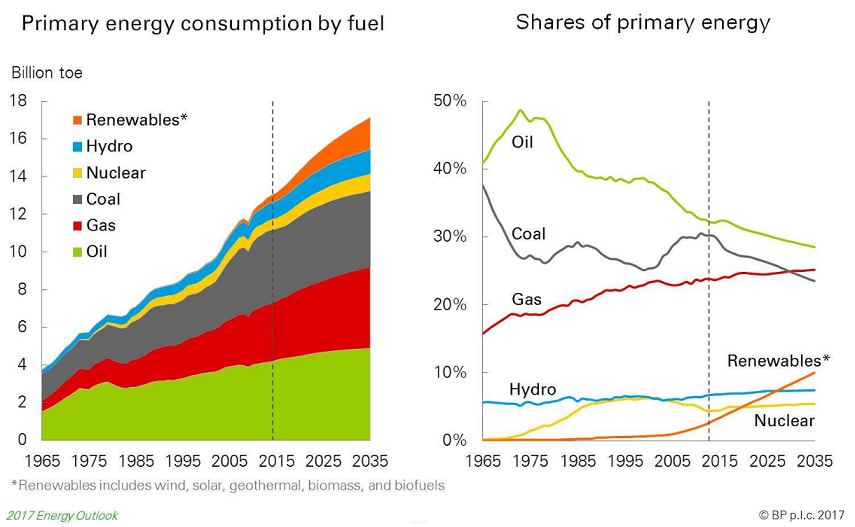 *Non-fossil fuels are expected to account for half of the growth in energy supplies over the next 20 years.

In its latest annual coal market report forecast released in December, the agency said the fall will be because of sluggish demand compared with other fuels.

Although coal-fired power generation increased by 1.2% per year through 2016-22, its share of the power mix will fall to just below 36% by 2022, which would be the lowest level since IEA statistics began.

“The energy system is evolving at a rapid pace all around us, with a more diversifying fuel mix, and the cost of technologies going down,” said Keisuke Sadamori, the International Energy Agency’s director for energy markets and security.

“But while everything else is changing, global coal demand remains the same.”

The report also forecasts that global demand for coal should remain nearly flat between 2017 and 2022, resulting in a decade of stagnation for coal consumption.

Global coal consumption fell 1.9% to 5,357 million tonnes of coal equivalent (Mtce) in 2016, the second year of decline, because of lower gas prices, a surge in renewables and improvements in energy efficiency, according to Coal 2017.

Coal demand is down 4.2% over the last two years, nearly matching the two-year decline in the early 1990s, which remains the biggest recorded drop since the IEA started compiling statistics more than 40 years ago.

It also said that by 2022, global coal demand is expected to reach 5,530 Mtce, the same as the average of the last five-year period, and meaning that coal use will have had a decade-long period of stagnation.

Coal demand dropped in China, the United States, and the European Union in 2016, but increased in India and across many parts of Southeast Asia, and shows no signs of slowing down.

For instance, despite the rapid growth in renewables, Indian coal-fired power generation is expected to grow almost 4% a year through 2022.

While India will be increasingly important to global coal markets, China will remain the key driver.

The potential for coal demand growth in China is limited, but the country’s supply-side reforms will be critical factors for coal prices in the coming years.

Meanwhile, the European Union, accounting today for just 6% of global demand, is set to become an increasingly marginal player, the report also stated.

The IEA highlights that urgent action is needed to support Carbon Capture, Utilisation and Storage (CCUS) technologies, which made important strides in 2016 but still lags far behind other low-carbon technologies.

“There is a broad agreement among energy leaders from both government and the industry that urgent action is needed to support CCUS, without which the climate challenge will be much more difficult to tackle”.

“This is why the IEA is working to give a new momentum to this essential technology and is committed to pushing the global dialogue forward. In November 2017, it organised a global CCUS summit in Paris that was co-chaired by US Secretary of Energy Rick Perry and IEA Executive Director Dr. Fatih Birol, bringing together more than 20 countries and CEOs of the world’s top energy companies to focus on this technology”.

“This serves as a critical reminder why technologies like CCUS are so important, and why governments and companies need to step up their policy support and investments in that sector in order to meet global climate goals,” said Mr. Sadamori.

“Indeed, without CCUS, coal use will be seriously constrained in the future.”