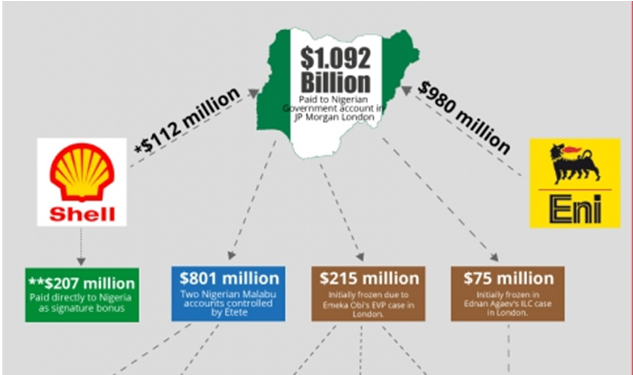 22 October 2017 Sweetcrude, Lagos — London based investigative newspaper, Global Witness, GW, has called on Royal Dutch Shell to apologise to Nigeria over its role in the $1.1 billion Malabu scandal.

According to GW’s senior executive, Barnaby Pace, described Shell’s bribery in order to obtain one of Nigeria’s juiciest oil block, Oil Prospecting License, OPL 245 in 2005 as “the biggest corporate bribery trial”, asking the International Oil Company, IOC, to first clear its name and then assure Nigeria that such will not repeat itself.

“This could be the biggest corporate bribery trial in history, and a watershed moment for the oil industry. The top brass of the UK’s largest company is in the dock after it finally admitted dealing with a convicted money launderer. There can be no clearer sign that wholesale change is needed. Shell must first apologise to the Nigerian people, then take clear steps to reassure investors and the broader public that this won’t happen again. ”

On October 15, a fresh report emerged, saying senior Shell executives have been charged in Italy for their role in a vast bribery scheme that deprived the Nigerian people of over a billion dollars.

Those said to be facing trial include Malcolm Brinded CBE, the second most powerful person in the company when the deal was struck.

Shell itself is also facing bribery charges alongside the four named individuals.

After several denials that it had no foreknowledge of the corrupt deal: that it paid only to the Nigerian government, Shell later made a U-turn and admitted that it knew its billion dollar payment would go to convicted money-launderer and former Nigerian oil minister, Dan Etete, in exchange for OPL 245.

After GW’s investigations, Shell acknowledged it had dealt with Etete, via his front company Malabu.

Dan Etete was convicted of money laundering in France in 2007.

Etete had awarded his own company the OPL 245 oil block while he was oil minister during the rule of former dictator Sani Abacha.

In December, the Milan Public Prosecutor alleged that $520 million from the deal was converted into cash and intended to be paid to the then Nigerian President Goodluck Jonathan, members of the government and other Nigerian government officials.

Now, Italian authorities have brought bribery charges against Malcolm Brinded, then Head of Upstream, alongside three others.

According to the Shell Foundation, Brinded has stepped down from his role as Chairman of the Board of Trustees due to the legal action in Italy, however, the investigation showed that Brinded remains a trustee of the Foundation as well as retained positions as Chair of Engineering UK and President of the Energy Institute.

In September 2017 BHP Billiton announced that Malcolm Brinded will not return to the BHP Billiton board due to judicial inquiries over the OPL 245 deal.

In 2002, Brinded was awarded the CBE for services to the U.K. Oil and Gas Industry.

Meanwhile, “Shell’s current CEO Ben van Beurden has described the emails we (GW) leaked as “pub talk”, but most pub chats don’t end up in criminal proceedings. Mr van Beurden has had four years as CEO to address a scandal that now threatens to engulf his company but has done next to nothing. He should draw a line under the case by admitting the company’s guilt, removing Mr. Brinded from his position, and setting out his plan for overhauling the company’s anti-bribery efforts for the future,” said Pace.

“These charges are a clear signal that it is no longer business as usual for oil companies in Nigeria. It’s now time for the Dutch and British authorities to follow Italy’s lead and hold their biggest company to account,” said Olanrewaju Suraju, of Human and Environmental Development Agenda of Nigeria.