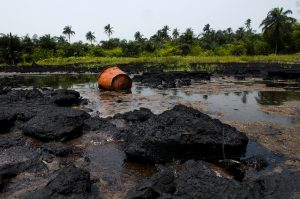 *File copy – The effects on the water of an oil spill which occurred in mid 2007, near the community of Goi, Ogoniland, Nigeria, photo taken 28 January 2008.

Port Harcourt — The Shell Petroleum Development Company of Nigeria Limited, SPDC, recorded 51 oil spills from its oil production activities in the Niger Delta this year..
Data obtained from the company shows that 44 of these leaks were caused by sabotage and third party interference by vandals, while seven of the reported spill incidents were caused by operational failures.
In the month of May 2021 alone, eight leaks which discharged 253.07 barrels of SPDC’s Bonny Light crude into the environment, were recorded.
Out of these eight spills in May, six were caused by sabotage whereas two were from equipment failures.
Operational spills accounted for 6.07 barrels of the 253.07 barrels, while sabotage accounted for 247 barrels.
Meanwhile, in 2020, SPDC recorded a total of 159 spills, with sabotage being responsible for 140 of the spills while operational factors were responsible for 19 of the incidents.
In 2019, the company recorded more spills totalling 190 incidents, of which operational causes were responsible for seven incidents, while sabotage was responsible for 183 cases.