on: November 16, 2018In: Community Development, featured 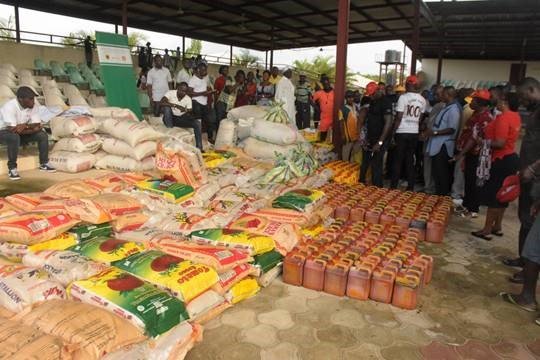 16 November 2018, Sweetcrude, Lagos — STAFF and management of the Shell Petroleum Development Company of Nigeria Limited, SPDC, have spent the last two weeks working as volunteers in the distribution of relief materials worth over N300 millions to communities affected by devastating floods in the Niger Delta states of Rivers, Bayelsa, and Delta.

With staff making personal cash donations, SPDC’s provision of food and non-food items and medical supplies reached over 4,000 displaced families in some communities as well as those in government-approved camps for internally displaced people (IDPs) in the three states.

General Manager External Relations, Mr. Igo Weli, said: “Staff made personal donations to complement the company’s US$1 million donation because we care and want to help affected people overcome the effect of the flood disaster.”

Weli said the relief materials are to support the people to have some normalcy until the flood completely recedes.

Delta State Commissioner, Bureau for Special Duties and Chairman Delta State Relief Committee, Dr. Ernest Ogwezzy, described SPDC as “a good neighbour”. The Commissioner, who spoke at the Patani IDP Camp, thanked SPDC “for identifying with the people at a time of need.”

Accompanied by the Director General, Delta State Emergency Management Agency (SEMA), Mr. Karo Ovemeso, and the Patani Local Government Chairman Barrister Perekebena Perez Omoun, Dr. Ogwezzy said, “While the government has provided some relief materials, it is heart-warming that SPDC still sees the need to augment the government’s effort in alleviating the suffering of the people.”

Earlier, in Akinima community, Rivers State, SPDC Regional Community Health Manager, Dr. Akin Fajola, supervised the provision of health services and referral of severe cases to nearby government hospitals, while in Ogbia Main Town, Bayelsa State, SPDC Manager for Social Investment and Performance, Mrs. Gloria Udoh, noted that the donations and medical outreaches to affected communities were to “identify with SPDC’s neighbours in their period of crisis.”

External Relations Manager Swamp West, Mr. Evans Krurkubo, and his team were received with fanfare at the Uwheru IDP camp in Ughelli North local government in Delta State. The traditional head of Uwheru, Agbaovwe Afugbeyah Oyise II, led dignitaries to appreciate the team for the donations.

Though the focus of the donations is on communities near its areas of operations, SPDC disaster relief support has also been extended to other communities most devasted by the flood and selected IDP camps in the three states.