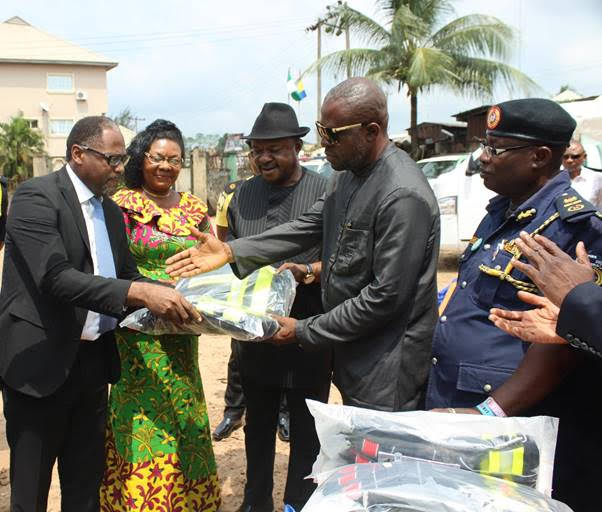 25 November 2018, Sweetcrude, Lagos — Shell Nigeria Gas has re-trained 30 firefighters in Abia State and donated firefighting equipment to the state fire service. This intervention was triggered by two recent fire disasters in the state which resulted in deaths and loss of property worth millions of naira.

Over 150 shops in the timber and furniture section of the Nkwo Ngwa Market in Aba was gutted by fire mid-November barely five weeks after an explosion on a pipeline belonging to the Nigeria National Petroleum Corporation (NNPC) in Umuaduru and Umuimo communities of the state killed a number of persons.

The SNG intervention, according to the company’s Managing Director, Ed Ubong, was to demonstrate the company’s continued care for the people and support to Nigerians particularly those in the company’s areas of operations.

“Some of these disasters are either avoidable or preventable. The major gaps are in training and equipment, hence our quick response to retrain the firefighters and provide them with modern equipment to support their operations,” Ubong said, adding that SNG would strengthen its gas distribution network in the Abia State to help in its rapid industrialisation.

The equipment donated included tunics and personal protective equipment (PPE). The state’s Commissioner for Transport, Charles Chinedum Elechi, received the items with a commitment that the state would improve on its safety record in a manner that would promote industrialisation and development.

Speaking at the donation, the state’s Fire Service Comptroller, Victor Gbaruko, described the training of his personnel particularly in hydrocarbon firefighting, as an investment worthy of emulation by other big players in the economy of the state.

The 20-year old SNG is fully owned by Shell and is the first gas distribution company run by an oil major in Nigeria. SNG’s extensive gas distribution network in Abia, Ogun and Rivers States has boosted manufacturing output and helped these states to grow their internally generated revenues while providing local employment opportunities.

In 2017, SNG executed a Memorandum of Understanding with the Rivers State Government for the distribution of gas to industries in the Greater Port Harcourt area and its environs. The agreement provided further opportunities for SNG to promote gas as a more reliable, cleaner and cost-effective alternative to liquid fuels in Nigeria.

SNG has built a reputation for safety and credibility and is the only gas distribution company in Nigeria whose facility is ISO 14001 certified. The company has implemented various development projects in the areas of its operations, donating or renovating schools, providing information communications technology (ICT) center, equipping science laboratories and launching numerous Road Safety Education and Awareness campaigns in 2016 and 2017.