Skeletal loading of products at NNPC depot over IPMAN crisis 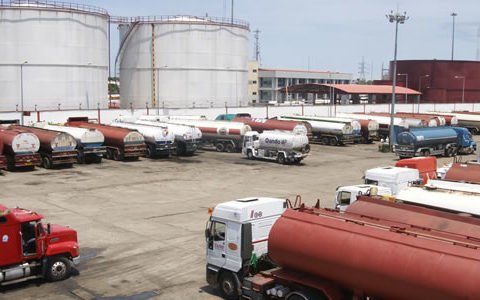 *Petrol tankers waiting to load at the NNPC depot, Ejigbo

Port Harcourt — The Independent Petroleum Marketers Association of Nigeria, IPMAN, has urged it members to keep loading and dispensing products, despite the crises rocking the union.

This is as there has been skeletal loading of products at depots in Rivers State, due to the crisis, which the police has been accused of aiding a faction of the Association to usurp power.

Speaking, IPMAN Chairman in Rivers State Dr. Joseph Obele, told our correspondent that he has not been able to access his office, as police operatives have continued to lay siege at the office.

Obele said the crises confronting the union began from the national leadership in 2014, of which even the Supreme Court had adjudicated on the matter.

He said depots, states and zones all these years have been exempted from the leadership tussle, even as the association has kept parading two national leaders since 2014.

“NNPC has 26 depots around the country and IPMAN is in all these 26 depots. The contention was about the national leadership of IPMAN in Abuja and not in the depots.

“The Police pushed us out. The police is giving protection to some people who are not even members of IPMAN to loot our office. Does the police have the power to push us elected officers out without a court order?

“PPMC is doing their best to bring in products. However I have not been able to access our office or sign anythin until police vacate our office.

“We advised all marketers to maintain peace. We are towing the path of the law.”

On the 48hours ultimatum earlier giving to the Police, he said members should keep loading and dispensing pending further directive from its national President, Engr Fari Sanusi.